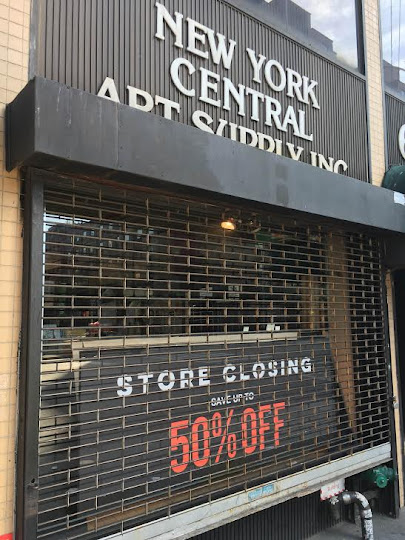 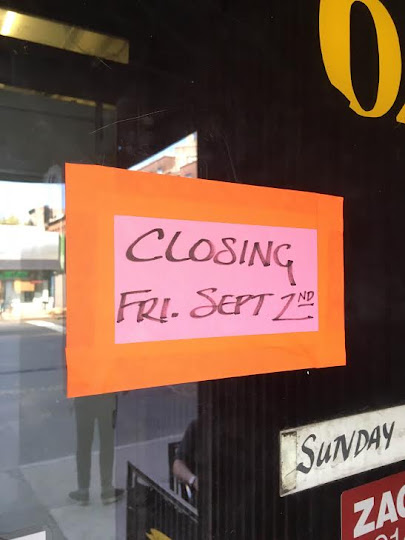 On July 11, the Steinberg family, who has run the art supply store for three generations, announced that they were closing the 111-year-old business for good in September. They cited "poor business conditions" and the pending sale of the building at 62 Third Ave. between 10th Street and 11th Street as the primary reasons behind the closure.

"We have been overwhelmed by the outpouring and support of the community and our customers," family member Doug Steinberg told me via email. "We are continuing to see if we can find a new home for what's left of our inventory and our paper collection."

For now, there are items up to 60 percent off... they are also selling fixtures and furniture such as flat files.

As for who might be the new owner of the building, there isn't any transaction in public records just yet. One source claimed that the Lightstone Group had purchased No. 62, and that the developers would use the space for part of the Marriott sub-brand Moxy Hotel planned nearby at 112-120 E. 11th St.

Doug Steinberg said that he was not sure who was buying No. 62. "But I am 99 percent sure it is NOT Lightstone," he said. "They actually looked at it and passed. Whoever is buying it is — as far as we know — unrelated to the hotel mania around the corner."
Posted by Grieve at 4:23 AM

Too bad they did not own the building and are reportedly forced out due to real estate instead of art business reasons. Sorry to see this tradition go.

There's no need for art supplies in NYC. The artists have been priced out of town. Try Detroit.

When I went in a few weeks ago to buy something, I asked that question about the building and I was told that indeed they did own the building. What a salesperson told me was that no one in the family wanted to continue running the business. What is posted here is vague, perhaps deliberately so--about the ownership of the building. Before the usual outcry, one would really like to know the facts of the situation.

...cannot imagine what will become of NYC without its artists and writers.

I think the family does own the building but it is in some kind of trust since Steve died.

After 111 years of business, the Steinberg family seems to have the right to close their business and sell the building. This is similar to what the DeRobertis family did.

Regardless I am sorry that the Central Supply staff will be losing their jobs. I hope they can find work elsewhere.

I will miss NY Central, and I likely won't be happy with whatever goes in there next, b/c it's likely to be a bar. Thus, their closure is a lose/lose for the area.

"I likely won't be happy with whatever goes in there next"

The most accurate statement I've ever seen in a comment on this blog.

I thought of Frank Stella who had his studio around the block and Jasper Johns whose studio was down the block on Lafayette. To think that 2 of the greatest artists of the 20th century were there...

My apologies for taking the following sentence to the linked EVGrieve article at face value: "The store, which has been in continuous operation at 62 Third Avenue since 1905, is losing its month to month lease at the end of September." I assumed this meant the business did not own the store. Through a more parsed out reading, it seems the family, as owners of the building, is ending its own lease on the store. Technically it may actually mean the store and building are separate legal entities but owned by the same family and for legal reasons the entity that owns the building must give the entity that owns the store a lease (even if the family owns both entities.)

The family owned this building, and the warehouse space on 12th street. Sold them both. It is easier to pocket $10-15 million and retire than run a store catering to a dwindling artist population

Family trust often get complicated after several generations, different groups may own the store and the building at this point. And with the massive land value increase and competition from online stores, selling isn't a big surprise. Most of the big art supply stores have left in the last couple years as well.

@7:14- You're obviously not an artist. NY Central was never a "big" art supply store. Pearl Paint, yes. It seems that whoever has title to the trust didn't want to continue selling art supplies. Be that as it may there are at least 4 or 5 very large Blick art supply stores below 23 St and a very well stocked Da Vinci art supply store on 21 St. So the market exists. Whoever owns the NY central trust is taking the money and splitting, but not because there aren't enough artists in NYC.

I've actually heard different groups of family members owned different parts of the business and properties. This is quite common in businesses that date back generations and can make things very complicated.

This could be as simple as someone owned a share in the building and needed or wanted the money from a sale. If three people
each own a share of a property and one wants to sell (barring of course an agreement that stipulates otherwise) the property must be sold. The other 2 shareholders could buy out the third, but again it doesn't seem anyone wanted the art business to continue. It's a prime EV location. I won't be surprised if it's snapped up by NYU.

Yeah - I hate to say it but: as a business owner I completely understand why someone would choose a large payout over the day-to-day grind. After all, if you devote your whole life and gamble with all your savings; it's not so you can work until you die. It's so, if you're lucky, one day you'll make enough to quit and enjoy the fruits of all that work and rolling the dice with your life savings. Sorry - but it's true. It rarely happens in real life but the number one reason I hear people cite as a reason they'd like to have their own business is: "so someday I won't have to work". And by that they mean: close the business because they've made enough to retire early.