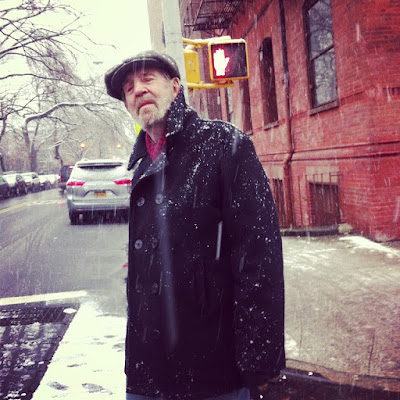 After a long, 10-year-battle with cancer, Richard Kopperdahl died on Sunday afternoon a little after 4.

He was 83 and had managed to keep the cancer in remission for several years with the help of his oncologist, Dr. Hai Sun Park. ("Hi, Sunshine," Richard liked to call her.)

He was generally in good humor about it, and always managed to make it up the hundred stairs to his home. He had lived in the same sixth-floor apartment since 1976.

He went once, even twice a day to the Odessa on Avenue A — all the waitresses loved him. Yesterday morning I went to tell the waitress there he'd passed, and she said she had visited him when he was in Beth Israel last week. When she came into his room, he saw her, recognized her, and said, "Oh, I don't need anything else."

Truly sad. Condolences to his friends and family. On the bright side, 83 years isn't that bad of a run. I know a few who didn't make it to 40. I hope he had a good life filled with love.

The Village Voice, where Richard worked, has a great piece on him. Here's an excerpt:

Remembering One of the Voice's Most 'Out There' Writers

Richard passed away on Sunday, August 21. In thinking of him, I remembered an amazing feature he wrote for the Voice in 1995, an unsparing, laugh-out-loud funny tale of his mad years in the mid-1970s, when he did six spells in Bellevue’s psychiatric warrens. He writes about clocks on the walls with no hands, of bending soda straws in such a way that he could transcend gravity, and of his certainty that God had put him on Earth to guide all of us down a more harmonious path.

Richard’s divinity never came to pass, but at heart his basic idea was sound: Everyone deserves a hand when they are down, an uplift that doesn’t defy gravity but does define our humanity.

That said, he was adamantly opposed to giving change to panhandlers, impatient with stupidity, and angered by arrogance. Once, as mobile phones were making their first intrusive forays into our lives, he was annoyed by two Masters of the Universe sitting at an outdoor café table and barking into their bulky handsets, oblivious (or not) to how much they were disturbing other diners. Richard picked up the heavy glass sugar dispenser on his own table and started yelling into it about the inconsiderate people sitting nearby. The pair looked at all six-feet-five of him and decided that they could make their calls at another time. Richard was sober and sane, but they prudently assumed otherwise.

Didn't know him, but used to see him around the neighborhood. One less face with experience around here.

He seemed like a beautiful soul. RIP. Thanks for linking to his writing. We keep losing the good ones.

He writes about clocks on the walls with no hands, of bending soda straws in such a way that he could transcend gravity, and of his certainty that God had put him on Earth to guide all of us down a more harmonious path.

I often reminded him of the line he wrote: "I was the prince for whom this world awaited."