Plywood arrives for 131 Avenue A; new Cajun restaurant on the way? 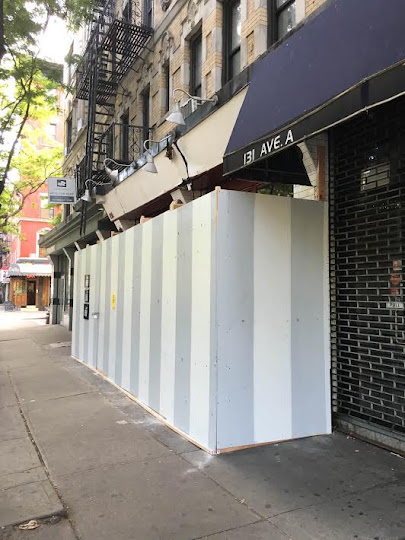 Back in December, CB3 OK'd a beer-wine license for the owners of Shoolbred's and Kingston Hall (and formerly Ninth Ward) on Second Avenue. The CB3 meeting notes refer to the new establishment as "a New Orleans Cajun restaurant." (Per the meeting notes, the applicants were seeking a full-liquor license; they also faced opposition from several nearby block associations.)

The space has been sitting dormant in recent months. There had reportedly been gas issues in the building, which ultimately led to the eviction/closure of next-door neighbors Nino's and Yoshi Sushi. Perhaps landlord Citi Urban has those gas issues resolved.

Team behind Shoolbred's and Ninth Ward vying for 10 Degrees Bistro space on Avenue A
Posted by Grieve at 4:18 AM

As Ave A evolves (or devolves) in a bro paradise filled with loud "restaurants" which happen to have several large TV's showing some sporting event continually, I have little faith that a restaurant serving anything more sophisticated than sliders and nachos will open here.

I'm sure the gas issues are settled now that there is the possibility of getting in tenants paying twice as much.

Would like a reasonable, good Cajun restaurant around.
I miss Baby Jake's catfish poboy.

The landlords are evil.

I hope the Muffuletta's are better than they were at Ninth Ward.

In my opinion it says something about the character of the owners of this "restaurant" that they would sign a lease with Jonas Realty when the residents of the building have been without gas for a year. Time for people to stop doing business with these type of landlords.

Most landlords in NYC are evil, especially in Manhattan. They are greedy and merciless assholes who probably takes baths in a tub of cash every night. Fuck, I wish I invested in property or had inherited something from family who actually had money.