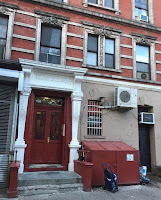 Reports of a foul odor led police to discover the body of a resident inside his apartment at 89-91 E. Second St. at First Avenue, according to the Daily News.

The man, who was not identified, was in his 40s. Police found his body last night around 10. "Officials said it appears that the man died of natural causes," per the Daily News.

One source told the paper that "He was a total hoarder."

The man — known to neighbors as the “box man” — was often seen toting at least five boxes into his apartment each day, but witnesses said none ever came back out.

DNAinfo reports that the resident was 57 years old. Also:

Neighbors described the man as polite but said he rarely interacted with anyone else in the building beyond the occasional “hello” and “goodbye.”

“He was very quiet,” said a neighbor named Melissa, who declined to give her last name. “I would always offer to help hold the door for him when he came in with his boxes.”

Police said the man’s body showed no signs of trauma, though the medical examiner has yet to determine a cause of death. The NYPD could not immediately confirm any details about the apartment's condition.

Sad. Well, at least he gets to have one more box now.

Curb alert: I hear they are already throwing his stuff to the curb. Might be some good stuff in there.

When I saw this headline, I assumed the post was about the cigar-smoking man on E. 2nd St between A and B. That street-level storefront was recently cleared out, too. The man who worked (and perhaps also lived) there always seemed to be taking in large quantities of soft drinks and pallets of snack food, often had a lit cigar, and always had the blinds drawn over the windows.

RIP mister and best of luck in heaven

I am going to say a prayer to our Lord for him. Poor man. I am sure he touched many lives.

May Jesus Christ and the Virgin Mary grant him with their presence and love...

What's with all of the religious comments on here? Not everyone has faith in JC or the Virgin Mary. That doesn't make us bad people. When someone dies, I feel awful and don't know what else to say. RIP man.

sign in the window 10 th st bet 1 st & A, gentleman in the wheelchair who lived in gridded wood window storefront passec away. any obit?