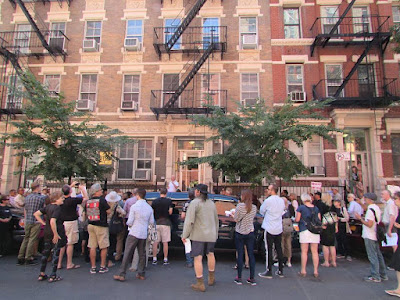 As noted earlier, residents, local elected officials and preservationists were holding a rally early this afternoon outside 112-120 E. 11th St. between Third Avenue and Fourth Avenue... 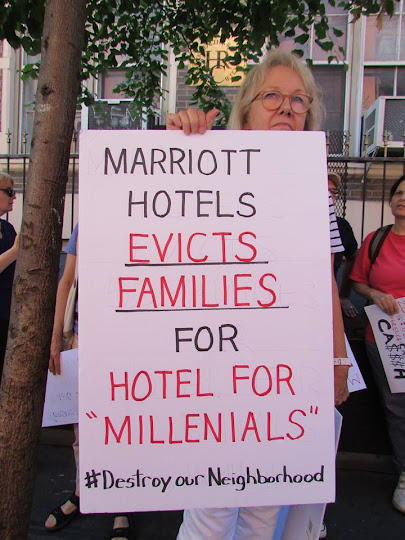 Here's some of the coverage via am New York:

“It is totally hypocritical and inexplicable that the mayor would allow good housing to be demolished for a totally unnecessary hotel no one wants or needs,” said Andrew Berman, executive director of the Greenwich Village Society for Historic Preservation.

The betrayal is analogous to the deed-lifting scandal associated with nearby Rivington House, in which city officials allowed a nursing home to be turned into luxury condos, depriving the city of tens of millions of dollars and a much-needed facility, Berman said.

“This is another example of the mayor selling out this neighborhood and his principles,” Berman complained. 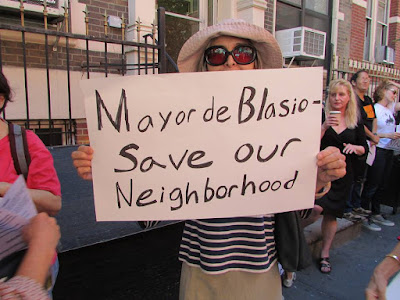 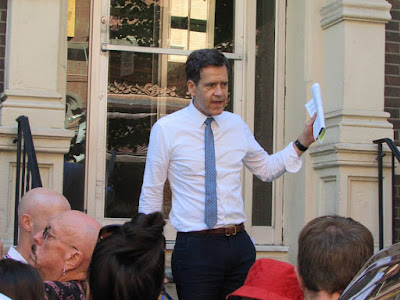 And some reporting from DNAinfo:

The protestors were joined by state Sen. Brad Hoylman, who is also demanding de Blasio himself take action to thwart the demolition, arguing the supposed failure by the LPC falls under his leadership.

“It’s his administration, and I am very disappointed at the LPC,” said Hoylman. “That is their mission. I think they have clearly failed, in this case, to respond to concerns of preservationists and offer an explanation as to why they are no longer protecting the buildings or even considering to protect them.” 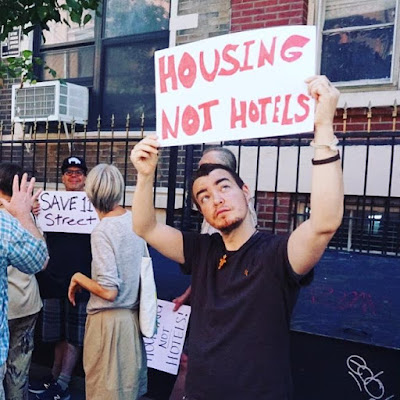 As we first reported on Aug. 8, the Lighthouse Group filed permits with the city to demolish five buildings — 112 to 120 E. 11th St. — that will yield to a 300-room hotel for Marriott's Moxy brand.

Thanks to Michael Paul Photography for the top four photos...

destroy our neighborhood, the millenials are coming

Seriously, this "development" blows for the nabe. RIP East Village.

Could this project be a bait and switch? Build a hotel and then sell it to NYU as a dorm?

People protesting millenials are shooting themselves in the foot (feet?). People between the ages of 19 to 31 entered the workforce during the worst economic downturn since the Great Depression, putting them at what could be a permanent disadvantage when it comes to earning money in the future. The number of millennials who work low-income jobs in retail, food service and hospitality increased 4 percent from 2000 to 2014, while the number of those employed in mid-to-high earning jobs decreased 2 percent during that period.

Of course, East Village politics being what it is, I doubt they will change.

If you care about this issue and want to write a letter to the Mayor, visit here:
www.gvshp.org/11thstreet

@7:53am: No one should be protesting "millennials" any more than anyone should be protesting "baby boomers" - since none of us got to choose when we were born. The ISSUE is that developers are deliberately turning this neighborhood from a stable one with long-term tenants to a majority-transient population, and having a majority of transients is pretty much never good for an area: transients have no roots, no long-term interest, and basically no reason to care about the location or the quality of life there.

If it were announced that this were going to be a high-rise flophouse (which is essentially what it is!), people would be protesting by the thousands. Find me a neighborhood that values having a high proportion of transients - other than Times Square, I can't think of one.

I resent the East Village being seen as "easy pickings" for developers to get rich by degrading what was formerly a very stable neighborhood. We've got the dorm residents who are here and then gone in a year, the Icon-type renters who are here and gone in a year or two, and now the prospect of this hotel, whose customers will be here and gone in a few days - thus the fabric of this neighborhood has been trashed. And no one is interested will be able to restore it. Certainly no one in NYC government is interested in preserving this neighborhood; it's almost as if we are seen as "disposable" - "yeah, what the hell, give it away to the developers, those people living there don't have enough money to really protest and no political pull."

This neighborhood, IMO, has been quite deliberately sacrificed to developers by NYC. IMO, what's going on here is the 21st century version of Robert Moses' "slum clearance" - approved by the powers that be.

@7:53 - Actually income/wealth inequality is the most significant among millennials. No other demographic group is so unequal.

NYC and SF are two examples of this - cohorts of very affluent educated millennials in tech, finance and media for example.

In contrast, many millennials from low-income and low-education households are stuck in crap jobs like fast food or low wage service jobs without benefits or reliable schedules. In fact they end up "serving" the affluent millennials who seek cheap instant gratification services like food delivery, chores (Task Rabbit), transportation (Uber).

It is also worth noting that affluence among 20-30 somethings is a recent phenomena. Throughout history, generally older people had wealth.

It is mind-blowing seeing the affluence of 20-30 demographic in NYC. In my building the millennials (tech, finance, media) are far wealthier than the older people (40 +) who work in sectors such as academia, arts, not-for-profits....

Very discouraging that millennials not interested in changing inequality. They have the numbers to make civic and political impact. But they do not care.

Is millennials in quotes because it's spelled wrong?

#DestroyOurNeighborhood -- don't mind if I do!

The only solution to the corruption of our politicians is an open primary. The 2 top vote-getters run against each other. It forces a politician out of the comfort zone of blindly supporting their party. Creates more leadership. Also we should vote against our incumbents. Make Cuomo and de Blasio the governor and mayor of nothing. POWER TO THE PEOPLE... AGAIN.

There IS no age classification for GreedPigsAnonymous.
There are however strict requirements for SnortingCapacity and possesing SoullessGuarantyInsurance.

Where was Assembly Member Kavanagh who sits on the housing committee?

Anonymous 11:09, Everything you say adds to my argument that it's self-defeating to refer to millenials when fighting against this hotel. Also, they *do* care -- they were highly represented in Sanders's support, and also in lack of support for Clinton.

Here is a notion take a few of these small frontage (140 feet) community lots build five story or six story residential buildings offer a small property tax abatement for 10 years if the front facade is architecturally done in a style such Beaux Arts, Greek Revival,Italian Renaissance, Federalist ,Gothic Revival or Austrian Secession that blends with the block or surrounding blocks. A win all around.

The Patch piece did a good job of showing that people who came to this neighborhood years ago are actually still here.

As an interesting contrast, the same Patch reporter toured the new bar coming soon to Third Avenue, and here is the link...
http://patch.com/new-york/east-village/vnyl-massive-four-floor-venue-professionals-live-1970s-dream

Doesn't sound like my '70s dream, which involved the Heartbreakers, among other bands. But c'est la fromage.

I just like the subtle irony of the woman complaining about millennials doing so with a hashtag. Twitter is basically the purest expression of who millennials are as a generation. And unsurprisingly, this woman doesn't have the nuance to understand that.

Just like all of these protesters don't understand it isn't "their" neighborhood. It was a German neighborhood before the beatniks moved in during the 70's, but you don't see crowds of Germans or Poles or Ukrainians complaining about all the elderly white people still living there. Neighborhoods change, adapt, evolve; what is hip today will be distressed tomorrow, and then hip again after that. If you don't want new businesses and tenants in your 'hood, own your property. Otherwise don't complain when owners see an opportunity to cash out and get out from under the city's ridiculous multifamily residential tax burden.

I'm somewhat confused - isn't this private property? I don't want an ugly hotel there either, but what legal right does the mayor/city have to stop a private deal between two consenting parties (assuming whatever they are doing is withing zoning regulations)?

If you want to protest against the zoning laws themselves, that's something different...