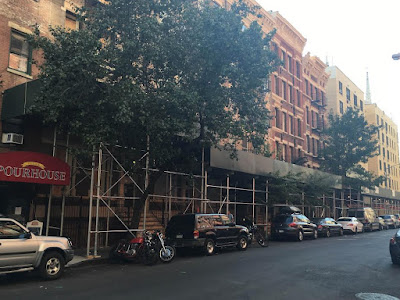 The five buildings of 112-120 E. 11th St. took another step toward demolition with the arrival of a sidewalk bridge this week.

As we first reported on Aug. 8, the Lighthouse Group filed permits with the city to demolish the now-empty residential buildings to make room for a 300-room hotel for Marriott's Moxy brand.

Local elected officials, preservationists and residents have spoken out against the new development.

City Councilmember Rosie Mendez, who was unable to attend the rally outside the buildings on Aug. 22, released a statement later last week:

“It is disappointing that we are losing five buildings built in the late 1800s on East 11th Street that had affordable rent regulated apartments and instead we will have a hotel that will be architecturally out of character with our neighborhood. Unfortunately, given the real estate market and effects of gentrification, it is doubtful many of the former tenants can stay in the neighborhood. These Old Law Tenement buildings were considered “landmark eligible” in 2008 by the NYC Landmarks Preservation Commission (“LPC”).

More disappointing is that for two months the LPC failed to respond when it was asked to designate these and neighboring buildings as a historic district since the buildings were in danger of being demolished. Losing affordable rent-regulated housing is unacceptable, but not getting a response from a city agency that once deemed these buildings to be landmark-worthy is outrageous.”

To date, workers have boarded up the windows on three of the buildings here between Third Avenue and Fourth Avenue... 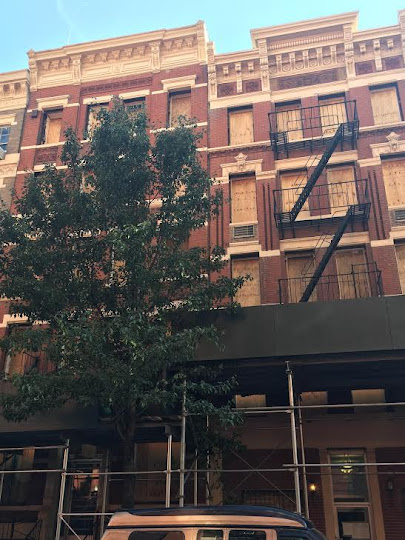 The Moxy website shows that the 11th Street property is expected to open in late 2018.

Permits filed to demolish 5 buildings on 11th Street to make way for new hotel (58 comments)
Posted by Grieve at 4:19 AM

Love how quick the demo after approval happens. But it will be an empty lot for a few years after that... Guess it's best to pull them down before the objections can get hear is the best to making sure....

I was at the rally last week and spoke with some very people which won a big victory against a developer on the UWS. The only way to fight this is to use the law to at the very least gain some time to build a case and of course get a lawyer to fight for the neighborhood.

NYC is so done.

And radio silence from City Hall!

"City Councilmember Rosie Mendez, who was unable to attend the rally outside the buildings on Aug. 22" - that's our councilwoman, really earning those tax dollars we pay her. God forbid she angers the developer class.

And BTW, this is sheer vandalism.

How about you Google all the work she's done for the EV fighting landlords that wish you were dead and scraped off their property.

She's the last one left, even fighting against other pols that side with bad actor landlords and developers.

Yeah, like she fought against NYU's 20 year expansion plan? Don't make me laugh.