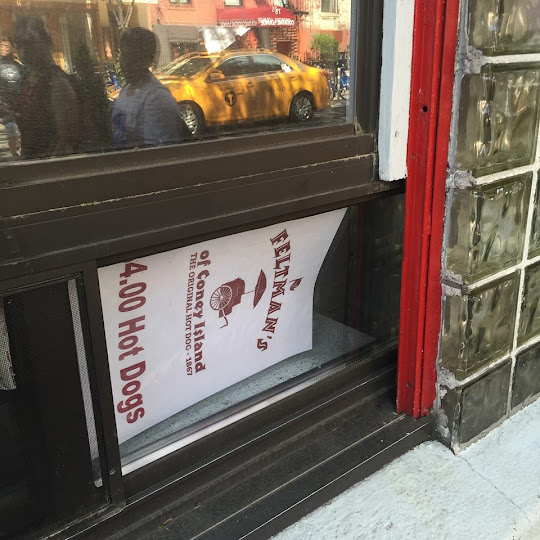 This is the latest step for Quinn, a Brooklyn native and Coney Island historian, to bring Feltman's back. Last summer, Quinn launched several Feltman's pop-up shops, first at Ditmas Park bar Sycamore then later at Augers Well on St. Mark's Place as well as at the Parkside Lounge on East Houston.

Quinn thinks that he has found a good match with Theatre 80 operator Lorcan Otway.

"Lorcan and I are both native New Yorkers and historians who believe in the preservation of NY history and small businesses. It's not often in this hostile environment that you find a landlord who believes in what you are doing and actually wants you there," Quinn said. "We found out that some of the performers who played at Theatre 80 a century ago got their start as singing waiters at Feltman's in Coney Island like Eddie Cantor."

At Theatre 80, Feltman's takes over for the recently departed Crêpes Canaveral.

Quinn, who works on the project with his brother Joseph, also started selling the packaged hot dogs in several NYC retail outlets yesterday. 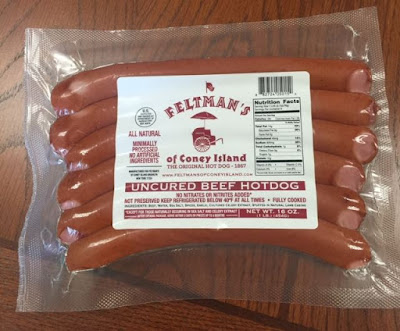 And there are still plans for opening a Feltman's restaurant in Coney Island ... though it won't be anywhere near as gargantuan as the original block-long endeavor, billed as the world's largest restaurant in the 1920s.

At Theatre 80 between First Avenue and Second Avenue, the Feltman's hours are for now Wednesday, Saturday and Sunday from 1 p.m. to 11 p.m.; and 6 p.m. to 11 p.m. Monday, Tuesday, Thursday and Friday.

Said Quinn: "Lorcan told me that he loves that fact that Feltman's is going from what was the largest restaurant in the world at Coney Island to the smallest kitchen on St. Mark's Place."
Posted by Grieve at 4:31 AM

Goin' to meet my baby at the hot dog stand.
Hot dog!

Sorry the crepe place didn't make it, their stuff was good and the people nice. But I will very shortly be giving this new venture a try, since I love hot dogs and am still heartbroken that Gray's Papaya on 6th and 8th was replaced by a (yack) juice joint, which in my world view is merely a travesty of a business. Welcome, revival of old NYC and Coney Island history!

Fuck Gray's Papaya, Papaya Dog is better, so is Papaya King which is better than Feltman's. $4 for a hotdog, fuck that, and no way the packaged Feltman's are as good as much less the same as the $4 ones cuz then no one would buy the $4 ones. Nathan's packaged hotdogs are okay but nowhere close to being as good as the ones in Coney Island.

Any word on if the crepe place will continue somewhere else? I really liked the guy who ran it, and of course, the crepes!!

Goj: Right there with you about Grey's on 8th Street. The spot to suck down two dogs and a "juice" after a long night on Earth and watch the creatures go by.

What are the hot dog carts charging for a dog these days?

oooh @Giovanni! I miss Japadog too! Maybe you were being sarcastic but I thought it was really unique and delicious. Even seemingly similar offerings like AsiaDog really aren't close to what Japadog was offering.

@1:40 PM I actually do miss Japadog, they had great toppings and they had veggie dogs too.

Gray's Papaya hotdogs were crap. Wannabe Papaya King right down to their design, colors etc. Papaya Dog at W.4th St. and 6th Ave. has better hotdogs cuz they grill the dogs like PK not boil them like Gray's.

I bought a package of Feltman's today in my neighborhood. They sold them for $12 per package. But they are like these monster sized hot dogs. They are definitely better than all the Papayas and much spicier than Nathan's.

Yeah, they're better than Papaya King, sure ok, wrong. Hotdogs aren't supposed to be "spicy".

Yea they are better than Papaya King and Nathan's. Papaya King uses Sabrett's. These Feltman's are spicy in a good way. They use a potato bun. The mustard was really good and the guy at the window grilled fresh sauerkraut for me. We'll be back.

I just ate there today and I must say it's an outstanding hotdog served by the owner who is doing S real good thing for the block / neighborhood. I rate this a must try for EV regulars .