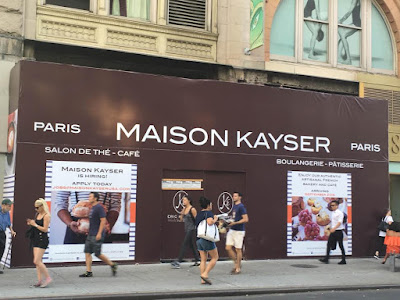 As you can see, Maison Kayser rolled out the branded plywood at their incoming location on Broadway between 13th Street and 14th Street...

The French bakery/bistro will open here at 841 Broadway at the end of September, according to the MK Facebook page.

In 2013, Gothamist named Maison Kayser one of the city's 12 best bakeries: "And though chain bakeries can be forces to fear, we have to admit this spot whips up one hell of a baguette," they wrote.

This location marks the ninth now in the the city for Maison Kayser.

One does not "whip up" a baguette, Gothamist. /pedant

I'm happy to see more bakeries -- we'll never have another DeRobertis, but if there are chain bakeries, as long as they are good chains I don't see a huge problem (opinion subject to change). Anyway, the past decade's pathological fear of carbs was depressing, so bring on the brioche.

There's one three blocks north of the square. Do they really need another one?

I prefer going to Breads Bakery on 16th, personally.

For those skeptics out there who fear the mediocrity of another "chain" bakery, please let me assure you that Maison Kayser is THE BEST Bakery in NYC. And, for those Olive Bread aficionados, be prepared for a doughy, soft, delicious, loaded with olives piece of heaven like you've NEVER tasted in your entire life. I'm delighted that Maison Kayser's will be closer to me in the East Village. MAGNIFIQUE!!

It's good bread and all but that French-only signage is the height of snobbish. Okay it's a French business but we are in USA. What if I don't know the meaning of "boulangerie" or "patisserie" or "salon de the"? Contrary to what my perception of a stereotypical French would probably think, there is nothing undignified about providing a little essential info in the native language, for those who maybe aren't fluent in French or menu-French. I.e. HEY FOLKS BAKERY COMING SOON TO THIS SPACE. Snobbish.

(not advocating a damn thing, their business they can do as they please, just voicing an opinion and exercising my right to call the French assholes)

Oh my god. If you want a giant blinking red-white-and-blue star-spangled sign that says GOOD BREAD HERE I'm sure you can find that at a Walmart "bakery" somewhere. The rest of us New Yorkers are sophisticated enough to figure out that a French bakery is coming to town. And dare I say you not suggest that New Yorkers have no "native language" unless you are prepared to start speaking Modern Dutch or better yet Munsee/Unami.

i'm psyched. my mom is OBSESSED with this place and i've never been. i'm down with lots of delicious bakeries! Breads is definitely TO DIE FOR: expensive as heck, but not kidding around. it's no fro-yo in a hoof, is what i'm saying.

when in france (or any other country) it is unusual to see english store signs. and the fact that lots of folks speak english does not mean their signs should also be in english.
so here in the usa, while diversified and multi-cultural, english is the "native" language.
but let's not make a big big deal of it.

I wonder whether Anon 12:49 has registered his / her anger with our beloved Council Person, Mme. Lopez for her support of the no-English language test for taxi-drivers. Shouldn't all drivers, including UBER, be forced to speak English? I don't think those of us who are going to go the Maison Kayser (I often do a take out lunch of a sandwich, pastry, and drink when I am in Paris). It is a fabulous store; if you don't like it, stick to a pure bagel shop. It would not be a post on EVG if there wasn't someone who had to drop a ridiculous negative comment.

11:30 is yet another transplant millenial who swears by all things chain.

Do you realize how fucking STUPID you sound by saying Maison Keyser is "THE BEST bakery in NYC"? That's like saying Starbucks is the best coffee in NYC, Chipotle is the best Mexican food in NYC, and Duane Reade is the best pharmacy in NYC.

How 'bout you get a clue and go to places which aren't chains, Clueless?

Anon 5:45
You seem to have cut short an idea. You might have meant that those of us who will go to Kayser won't be what? intimidated by the outward signs of France. The stores I have been in in NY are all English friendly. I am sure people won't need a Harrap's Dictionary to buy a pistachio / apricot tartlet.

What if I don't know the meaning of "boulangerie" or "patisserie" or "salon de the"?

You learn! Are you saying you go around with blinders on all the time? Context helps, as does having taken french in high school, but there's far more than one business in the city that has that "pretentious" French going on, and I've seen salon de thé in more than one place in this city.

I for one would much rather see a Maison Kayser here than a cosí any day of the week!

We're not in the USA, 3:34 -- we're in New York City. Please don't infect our island oasis with your jingoism