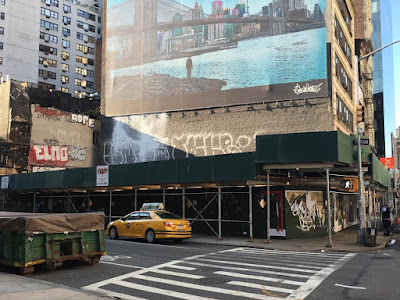 A demo crew made quick work of 71 Fourth Ave., the single-level structure at the southeast corner of 10th Street... as you can see from the handy Blogger Portals... 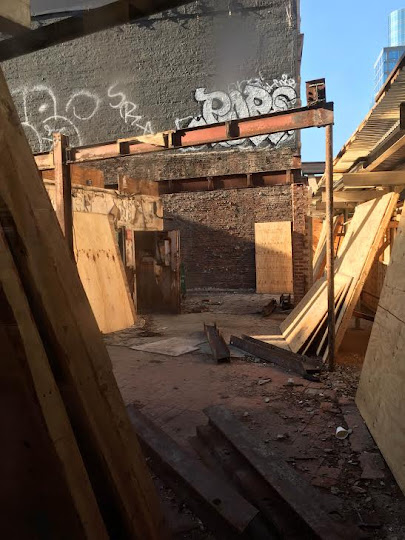 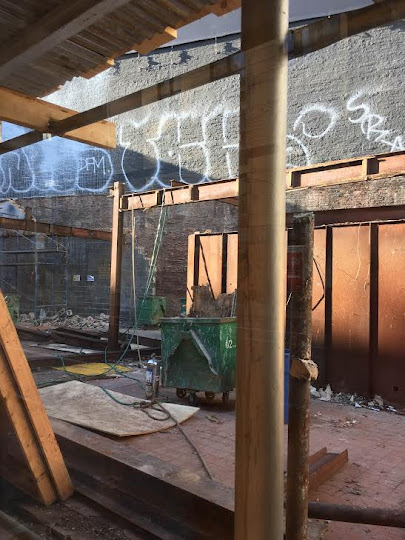 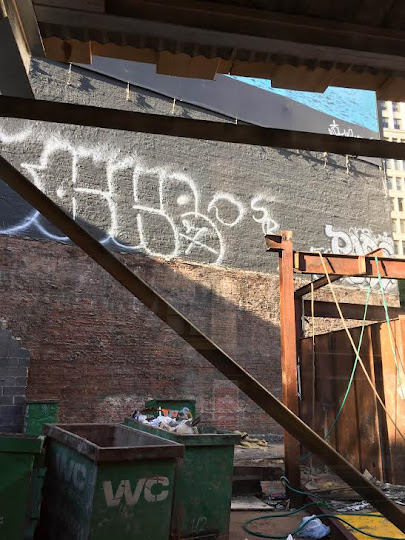 Workers will next turn their demolition attention to the neighboring townhouse at 82 E. 10th St.

All this is to make way for a 10-story retail-residential building. The approved permit shows retail on the ground floor and 12 dwelling units above. The residential portion encompasses more than 24,000 square feet, so those units will presumably be the crucially needed high-end condos. Floors 2-5 will each have two units while 6-8 will each have one unit while a two-level duplex to top things off.

As previously reported, development has been stalled here for years. The previous tenants, including the Green East deli and St. Marx Music (and previously the Atlas Barber School), were cleared out in early 2007. There were once plans to build a 13-story hotel, though the city surprisingly never OK'd that proposal.

With new building OK'd, corner of 4th Avenue and 10th Street finally ready for razing
Posted by Grieve at 4:25 AM

And to take down a lovely 19th c townhouse as collateral damage.

How about Marc Jacobs.

'Im sure CVS pays the rent -- only these large chain seem to be able to afford it anymore.

Fourth Avenue from 9th Street up to 14th Street seems to be undergoing a revitalization--much of it in restaurants. Not a restaurant: I noticed this morning at the long vacant 61 Fourth Avenue (Ibezia Kids and before that Reader's Stationary) signs of life. A training or interviewing session for Orange Therapy Fitness. I imagine that many of these new restaurants aren't relying exclusively on the neighborhood regulars who post on this site. We forget that there are lots of businesses in the side streets going south from Fourteenth Street to Houston.

In a sane world, the destruction of that townhouse would be considered a criminal act.

oh sweet! i'm sure that 10 story building will provide affordable housing for some of the longtime residents displaced from their own neighborhoods by gentrification over the past 20 years. i mean wouldn't it be completely infuriating if they just erect another of the hundreds of luxury buildings filled with decadently gaudy rentals of prohibitive cost that only the richest of the transplant elite and their entitlement spawn can afford. wouldn't that be another nail in the coffin of the EV.. but yea, i expect that's exactly what's happening here. i want this bubble to pop, and violently, spewing sewage all over these gluttonous real estate vultures, drenching them from head to toe in vile excrement.. that would be a good start.