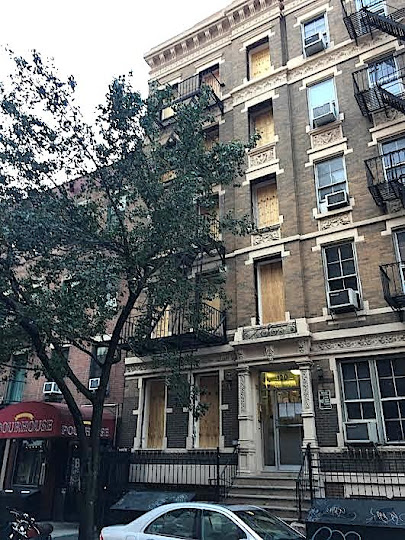 As previously reported, the five residential buildings at 112-120 E. 11th St. between Third Avenue and Fourth Avenue are slated to be demolished to make way for a new hotel from the Marriott family.

Last week, workers began prepping No. 120 for asbestos removal... reps for the Greenwich Village Society For Historic Preservation (GVSHP), who have been monitoring the situation here, noted the poorly sealed windows late last week... (the windows were boarded up by the end of the day Saturday...) 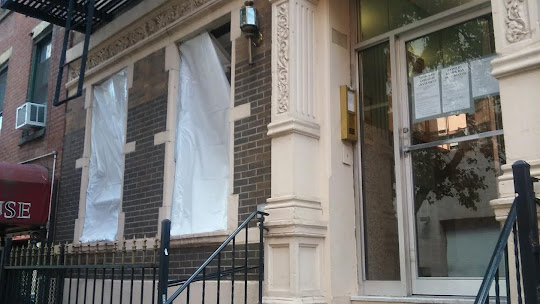 The posted notice points to asbestos in the window caulking... 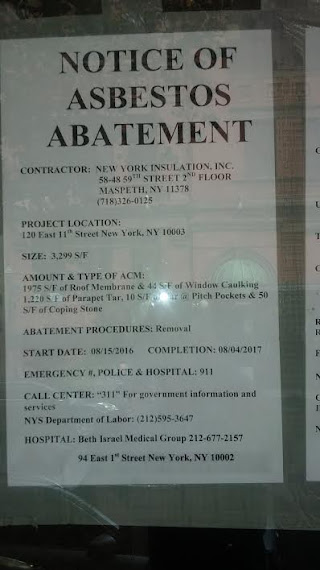 In addition, the GVSHP notes that the company landlord the Lightstone Group hired for the asbestos removal — the Queens-based New York Insulation Inc. — has a suspect past. The company is currently barred from bidding on public contracts. (The 11th Street work is not a public contract.) 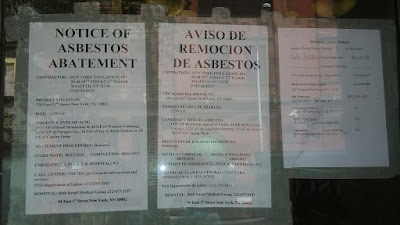 In May 2012, the company pleaded guilty to failing to pay six employees more than $30,000 they were owed, according to published reports. The case involved rooftop work at Wheatley High School in Old Westbury, Long Island.

Per the Long Island Business News: "Along with the fines, New York Insulation and its principal, Anthony Cardinale, are prevented from bidding upon or being awarded any public work projects in the state of New York for five years."

New York Insulation Inc. appears on the New York State Department of Labor's "List of Employers Ineligible to Bid on or Be Awarded Any Public Work Contract." They are eligible again for public contracts starting in May 2020.

As a reminder, the GVSHP is holding a rally/protest outside 112-120 E. 11th St. In case you missed the invite notice from Friday:

Are you as angry as we are that the City is allowing five "landmark-eligible" 19th century buildings at 112-120 East 11th Street, which formerly contained long-term tenants and affordable housing, to be demolished to make way for a 300-room hotel geared towards globe-trotting millennials?

Are you as appalled as we are at the hypocrisy of the administration for refusing to save these buildings, which are being developed by a donor to and political appointee of the Mayor?

Are you disgusted by what this will mean for this block and this neighborhood?

The new development will bring jobs to the neighborhood. Even as a long term village resident I see the benefit here and I read earlier the buyer moved all the stabilized residents to the building behind. We can't continue to fight these when they bring hundreds of jobs to the neighborhood and the buyer seemed to be nice to most of the tenants. What more can we ask for?

The most important questions about this hotel, which every millennial who plans to stay there will want to know, are these:
How many of these rooms will be rented out by the hour?
How many hookers and hustlers will the hotel be able to accommodate?
Are bedbugs extra, or are they included for free?
Will room service be able to cater to the special dietary needs of my dog?
Also, will there be table-side mixologist service at the rooftop pool bar?
Is there a discount for the children of Russian oligarchs and Eastern European dictators?
Will we be able to open the windows in the rooms so we can throw water balloons and urinate on pedestrians down below?
Finally, will the hotel provide special VIP access to Webster Hall so that we don't have to wait on line with the locals? Because as everyone knows, we hate locals.

The additional traffic -- an endless additional stream of cars, trucks (deliveries) and pedestrian -- is just one of the reasons that this is a poor development choice. Has no one considered that?

$7:55am and @8:24am: EXACTLY! This neighborhood does not need to have more people who are "just passing through" and who have no reason to care or respect the quality of life for those of us who actually live here. And we definitely don't need the additional truck traffic (which is inevitable with a hotel), nor the proliferation of car service cars (which will also be inevitable with all those hotel guests coming & going).

7:50 AM: people have to travel from further and further out for these jobs. Mostly low paying service jobs. There's no longer affordable housing in the EV for even mid-level earners, people with families. Eliminating more apartmenr buildings in the EV is a loss to the community no matter how many jobs are produced.

@7:50
IMO there are many reasons (which others have noted) to oppose the destruction of these buildings and replacement with a hotel.

Just as NYU has converted the EV into a place for affluent transient students/recent college grads, a hotel has the power to further and rapidly destroy the EV - transforming into a commercial area.

You make a great point. The traffic from the movie house patron, movie house deliveries, Webster Hall, band buses and patrons, the post office trucks... will be a nightmare. It makes you wonder why would they want to build a hotel on that site. Also the noise from Webster Hall is so disturbing... many tenants have run out of the buildings over he years. Why would Marriott want to deal with noise and the traffic congestion when they could find a better location somewhere else?

Hundreds of jobs? I'd say many less than that.

Source: me. I have worked at bigger hotels with less than 100 people on staff.

Low paying service jobs is not a great thing to bring to the neighborhood. Giving families and individuals a neighborhood where small business can start and grow is how you create meaningful employment, stability to a neighborhood and preserve character and diversity. Large commercial businesses like this do the complete opposite, they belong in Times Sq, along the larger Avenues and away from where NYers actually live. There is no urban planning in this city it is sold randomly (or to friends of the Mayor) with the most money. Please do not fall for the "it will bring need jobs to the.....) This is the same "trickle down economy" bullshit Reagan's conserviatives have sued to fuck over the middle class for decades. Trump is using again when he speaks to those that once worked in manufacturing jobs which left North America decades ago and will never return.

Anon 6:52 makes a valid point about service jobs. But the question I would like addressed is what kind of small businesses can open and prosper in the East Village? Most of the new businesses written about on EV Grieve seem to be specialty coffee shops or shops that are selling delicate cakes and cookies,etc. I am not sure that the people employed in these businesses are not making salaries much above what a service worker in a hotel makes. I don't know the percentage, but I would make a guess that 80% of small businesses fail within two years. The reasons are complex and rent is not the immediate reason (before you open a business you know what the rent is going to be going out a few years and that should be calculated in your business plan--it shouldn't be a surprise). Many small business overestimate what their foot-traffic is going to be and miscalculate the mark-up they can charge for products they are selling. They convince themselves (and their friends convince them) that everyone is going to stop by their store--that being one flight up is no problem--everyone will come running.

Affordable housing for sure. But these buildings are walk-ups--NO ELEVATORS!! They should be torn down, not for a hotel but to build housing that is appropriate for the needs of the community: accessible for the handicapped and senior citizens. These buildings no longer serve the people of this city. They are outdated and should go--the protesters should be fighting for appropriate affordable housing in this space not to save these buildings. Did anyone survey the people protesting if they would like to live in a fifth floor walk up?

Affordable housing for sure. But these buildings are walk-ups--NO ELEVATORS!! They should be torn down, not for a hotel but to build housing that is appropriate for the needs of the community: accessible for the handicapped and senior citizens.

Also, my roommate just died the other day at 83, after a battle with cancer; we live [lived] in a sixth-floor walk-up. He had lived here since 1976 and been taking these 100 steps at least once a day, every day, for over over 40 years: it's likely the stairs helped him survive as long as he did. I'm saying it's not feasible or humane to tear down every walk-up in this city just because you don't like to take stairs; people had been walking on those stairs for over 100 years.

Scuba Diva 7:26:
Anecdotal evidence is always just that anecdotal. Perhaps yes perhaps no. And who is supposed to rehabilitate walk ups? The owners? The city? Good for your friend of 83 who managed the stairs, perhaps yes, perhaps no. I would argue that elevators become a source of personal freedom for seniors and others. Instead of planning on one trip outdoors each day or every two days because of the stairs (assuming you are on an upper floor), elevators give an ability to go out at will. Of course we could do without lots of innovations. I am sure that there were people in the last two weeks who said they never need an air conditioner, that doesn't mean they shouldn't exist. And, lots of people, other than seniors need the convenience of elevators.

anon 8:39 But the question I would like addressed is what kind of small businesses can open and prosper in the East Village?