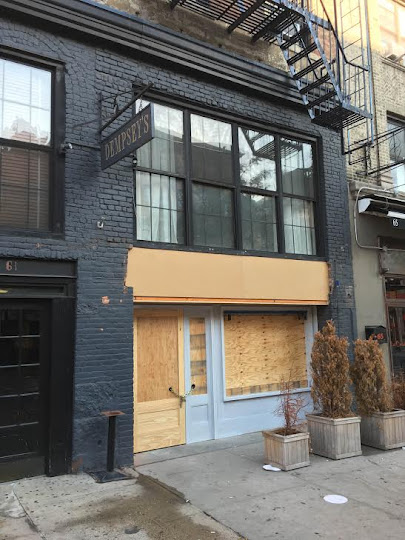 In recents weeks workers have been transforming the former Dempsey's space into... something.

And yesterday, EVG correspondent Steven got a look at the new exterior here at 61 Second Ave. between Third Street and Fourth Street... complete with new signage... 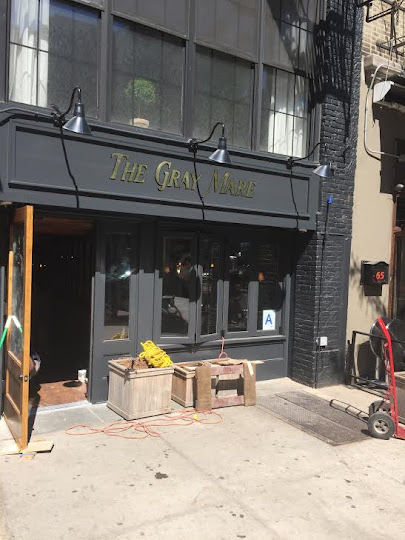 No word yet exactly what The Gray Mare will bring... at first glance it looks to have a similar pub vibe like Dempsey's owner Tom O’Byrne's other nearby establishments — Slainte at 304 Bowery and Cooper’s Craft and Kitchen on Second Avenue at East Fifth Street.

After 24 years, O'Byrne, who also owns the building at 61 Second Ave., decided to close Dempsey's in April. We reached out to O'Byrne last week for a comment on the new space, though didn't hear back.
Posted by Grieve at 4:20 AM

Email ThisBlogThis!Share to TwitterShare to FacebookShare to Pinterest
Labels: Dempsey's, the Gray Mare

This looks like the perfect place for former Gawker writers to drown their sorrows in flaming mixologist specials. The old gray mare, she ain't what she used to be...

The Gray Mare is owned by Tom and I look forward to it! I will always miss Dempseys, but from what I hear of the changes (less TVs, a bit brighter inside, etc.), I am optimistic!

If it's owned by the same guy as Slainte and Dempsey's, we'll definitely stop by. It looks like they've done a nice job updating the decor and it looks more "adult" than "frat," so that's a plus.

@eastvillagesiren - definitely Tom (owner of Slainte and both Coopers)! He's very excited about the change and so am I - can't wait to stop in!!

This was the kind of place where you could spend 40 bucks and not get even the slightest buzz. And Cooper Craft Ale...all you have to do is walk by and look at the clientele. Never saw a face that I would recognize from the neighborhood. But hey,as PT Barnum said: "...."

this is the kinda "gentrifacation" i can get behind...how do you spell that?

Just another watering hole for the herds from uptown that are passing through, nothing to see here...

I'm long-time from the neighborhood (a block away), and I've gone to Cooper many times. It's a mix of young/old, neighborhood people and "uptown" customers, just like I go uptown and even into Brooklyn to restaurants and bars.

Cooper has some very nice staff, daily specials and a pretty good beer selection. On the day that Hurricane Sandy hit, they kept their kitchen open until Con Ed cut their power, so us locals who were getting ready to bunker in could enjoy some hot food and a beer. I think they're a good neighbor, and I'll be happy to check out the Old Gray Mare.

GentrifIcation - you were close.