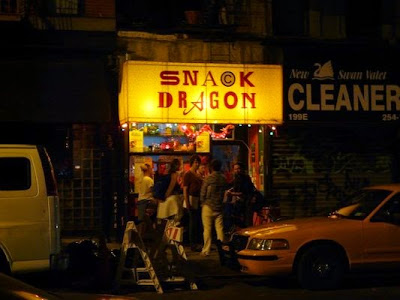 Snack Dragon proprietor Josephine Jansen broke the news to us yesterday. Her eclectic sliver of a taco stand and hangout at 199 E. Third St. just west of Avenue B will close for good on July 31.

A familiar reason and a familiar figure are behind the impending closure.

"[Landlord Steve] Croman wants to triple the rent to $3,900 for 100 square feet of public space and a tiny basement," she said. "They will not negotiate the lease."

For now, the Williamsburg Snack Dragon will remain open.

Snack Dragon opened nearly 10 years ago around the corner on Avenue B, in a vacant smoothie stand outside Ben's Deli. Jansen inexplicably ran afoul of the East Village Nightlife Task Force and had to close. She moved into her current space in August 2006.

Previously on EV Grieve:
Watch a lot of people speak out against Steve Croman and 9300 Realty
Posted by Grieve at 5:30 AM

That's pretty lame. I just clicked through and read the other article. It's absurd that we have task forces that will go after small business owners like this chick yet on ANY. GIVEN. WEEKEND. the Dudes, Bros and Sarah Jessica Posers get blackout drunk at the same bars, vomit all over everything and urinate in the vestibules of buildings. I know. I know. If I don't like ... move. You know what, I did move. I moved here in the 90s to get away from these bores but they followed.

But I digress. I hope she finds a new place to run her DIY taco stand and she stays local because it's people like her that make this city awesome. Good luck!

Disgusting, this fuckin landlord. What does he expect to go there for that much $???

This on the same day they announce that Mayor DiBlasberg (DiBloomio?) and his family are going on an Italian vacation for 10 days. Swell. For all his proletariat declamations, I see he is also going to stand by and do nothing about the city being stripped away by rapacious developers, greedy landlords and clueless yobs clamoring for the latest must-have - whatever.

So sad. Snack Dragon is one of the best late night haunts off of Avenue B. Cheap, delicious delicious food. It will be greatly missed!

Croman...karma will come you disgusting pig.

...remember the Orchidia? Residents did not support the "new" business, and it took about thirty years for a new tenant to "stick" (*ahem, the Starbucks on 2nd Ave. and E. 9th.)

Look at the many places that don't make it a year at these hyper-inflated rents! It's going to backfire as short-term thinking always does.

I wonder what happened to the Taco Chronicles?

HaHa, it's true! I moved to NYC in 1991 for the same reason. I got the hell out last year. I'm back in the suburbs now and it's actually less annoying than the East Village. It's a complete cultural switch. All those "norms" and "bros" who we used to try and escape from flock to the city now. Thank God for the internet, it helps me daily to realize that I'm missing absolutely nothing. You can be anywhere now and experience the sameness. The people here look exactly like those in the EV.

Too bad about small businesses there. The days of "kooky" small shops are over.

If this place opened 10 years ago and they have a spot in Williamsburg then aren't they bloomerg era gentrifiers? And of you moved here in the 90s -guilianis ny- then aren't you part of the problem? So you moved here made it worse and left thanks I'm not grieving for this sorry

Man that was one of the last places to get some tasty, healthy, non-crap food in the neighborhood!

Now what...go across the street to the "southern" place that used to be, oh right, another affordable good neighborhood food spot?

It really is getting so there are no places to serve those who, um, just live here...and we're speaking to the wind, because those in power so don't give a damn about us "small" folks. So goes our neighborhood, so goes the country.

Steve and Harriet Croman have ruined so many lives and one day, hopefully soon they will gets theirs.

Hell is too good a place for the Cromans

This landlord Steve Croman and his wife Harriet are the same greedy landlords that evicted 23 families from their homes on E. 72nd street to make a mansion for themselves and doubled the rent on a family with a young child who has cancer and has harassed and driven so many tenants out of their homes by every illegal means possible. Hell awaits the both of you

Well this really scares me! I live right next to this place.. literally and I have to admit that while I used to know everyone that worked there I haven't been there regularly in the last 8 months or so. Snack Dragon was one of the last cool places left on our block. I've taken photos in there for photography class so I can tell you that the space isn't worth 4 grand a month. It would need A LOT of work for someone coming in.. but that's why she's been able to be there. It was just some tiny little hole in the wall.. there isn't much actual kitchen stuff that is a part of the building. I don't know how anyone else would really do something with that space. Horrible.

Good luck trying to fit a Starbucks or a Duane Reade there, greedy landlords.

the cromans will do anything to make anyone life miserable. That is their pattern of behavior. He has different sets of reps to help him. He will attack tenants of all type, tenant and landlord of other buildings, it have seen other dhcr regulated or nycha or hud regulated landlord and tenant also end up to be his victim. if you are disabled and or senior and you are not croman tenant you can easy be picked false claim in court and use your name to sue their tenant claim their tenant reside in your apt this is their business behavior. if you complaint on your lease or rent calculation hello eviction.

Croman is a psychopath. And what is de Blasio going to do about it?

"You've been Cromanated". A new term that sadly captures the truth of what is goong on-a greedy landlord feasting on the community and small businesses with a mayor who STANDS BY and WATCHES while talkinf about Old New York. Do something de Blasio!

What exactly is the mayor supposed to do? you think he cares about this? He's too busy going to parades or going on vacation.

I just sent the Corman's a nice little note on their contact page. What I didn't say was "GO FUCK YOURSELVES."

I am not a croman tenant - lucky. but me and my landlord has been his victim for many years. Each case he starts there is a good chance it is a set of all new reps all new attorney all whatever. They would start a frivolous lawsuit or attack then immediate reps changes and new reps are used to replaced the case. It have seen my landlord for many years have been accused of apt renting fraud and government fraud. Croman team will pick a business or person use that name or business attack a tenant picked of his choice apply in my landlord or me saying his tenant is living in my apt and my landlord is illegally renting apt to his tenant and hello eviction. In court expect false document is used as proof to get at you. this is identity fraud. His target are any age any sex any race. The best are non English speaking, senior, those under care by medical personell. etc...and getting away with it. if the illegal eviction wins by Croman the attacked building owner will face fraud and identity theft and false going to the government for funding or subsidy if it is a rent subsidy housing. this is one of croman's main trick every one knows that.

The FALL OF THE CROMAN EMPIRE!

This article makes the Crime organization (Steven and Harriet Croman) look really good. It seems they are playing within the guidelines of nothing uncommon about a greedy landlord, thats all. But what they are really all about is extortion, intimidation,frivilous law-suits, illegally deregulating rent controlled and stablized apartments, harrasing tennants--sending private investigators to your home to scare tennants. Harriet Croman notoriously is known to notarize and purger false testimony. They never return deposit money to tennants. I hope the system catches on to Steven and Harriet Croman and punishes them to the full extent. They have caused a lot of misery to a lot of people. I want justice for the one person--the baby with cancer he kicked out among all the other victims I don't know.