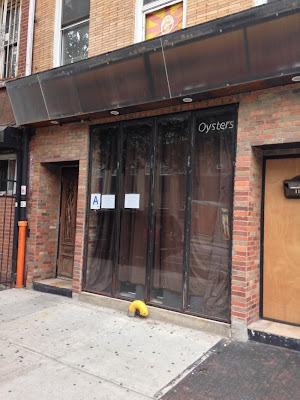 In a letter posted to the Apartment 13 Facebook page on July 15, Chef John Keller and his partner Lorrae Doig thanked everyone who supported them, before noting that the restaurant "became collateral damage and fell through the cracks of a faulty foundation due to no fault of its own."

They ended the noted saying they looked forward to seeing people at their next venture.

Just like that yesterday, signs arrived on the former Apartment 13's front doors … noting some kind of French bistro on the way. 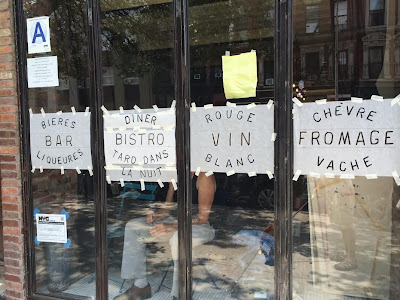 Dave on 7th, who took the above photo, also saw a wine delivery to the new bistro. Per Dave on 7th: "Looks like they're just rebranding as a French bistro. The 90s are back!"

However, Keller and Doig have NOTHING to do with this new venture, likely the work of Paul Seres, a partner in The DL on Delancey and Ludlow who was originally behind the Apartment 13 venture.

Previously on EV Grieve:
Apartment 13 will not be reopening on Avenue C
Posted by Grieve at 5:05 AM

Email ThisBlogThis!Share to TwitterShare to FacebookShare to Pinterest
Labels: Apartment 13

I suspect the whole Apt. 13 was just a sham to get the liquor license and now it's going to turn into the same kind of shitshow these assholes run at The DL.

Looking forward to this any idea on a opening date?