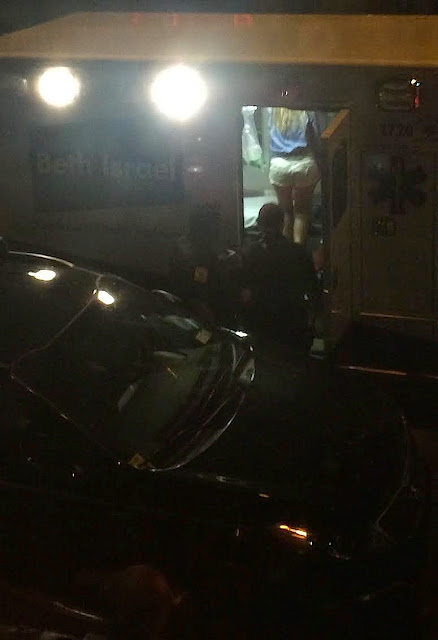 At around 11:20 pm, July 19, a group of drunk friends (who obviously were all still in college) were playing truth or dare outside 97 East 7th. They were obnoxious and loud.

Bro #2 foolishly did, but he immediately fell from hanging onto the 2nd floor fire escape to the basement staircase.

There was a loud thud.

The girl friends of the bros started to panic and a commotion ensued. Bro #2 was unconscious. Calls to 911 were made.

The ambulance came to the scene 10 minutes later and bro #2 seemed seriously injured. I witnessed the whole thing … from the moment the group of friends started hanging outside the bldg till bro #2 got injured and was brought to ambulance. Everything happened so quick.

I don't know how to feel about this whole situation. I am livid about how these kids think that it's okay to just party like that on the sidewalk. They were bothering several neighbors as they were loudly hanging out on the sidewalk and they bothered even more neighbors the moment bro #2 fell to the basement up until the ambulance came.

I also feel quite sorry for bro #2, but he clearly brought this upon himself and it's sad how NO ONE among his friends tried to stop him from climbing the fire escape..

Oh, by the way, seconds after the ambulance left, his "friends" who were left at the scene started to laugh and giggle about what just happened.

Despicable behavior. Did no one call the cops on these feral children? Not that the cops would come, necessarily. Maybe we should start shooting super water pistols at these little trolls. If I found someone clambering about my fire escape, I'd shoot first and ask questions later, and it wouldn't be a Super Soaker.

Hey, I did some obnoxious shit in college, too, even if I didn't go in all that privileged or clueless. I bet pretty much everyone who's been that age has some shit they're glad happened before the age of Instagram and localblogging. Teens and early twentysomethings have no social peripheral vision.

I was sitting on my stoop next building and saw the whole fiasco as well. Guess I was beat into sending this news to you!

This girl who just moved in my building was hanging out with her drunken frat boy pals late at night on my stoop about a week ago and they were just as obnoxious. I would much rather have a lonely crusty punk on my stoop than a group of drunken frat boys.

Why are these idiots allowed to live here? They all should just go back to where they belong - sleazy NYU dorms.

not really liking the invasion of these BASIC bros and gals... can we shoo them all away from our hood?

Most bars cater to the college crowd, which are most underage, especially that fauxrish bar near 7th and 1st. Would not be surprised if these kids just came from there. Thanks for stopping by, kids.

We all need to learn lessons growing up. I'm sure he won't do that again :/

Paint ball guns would be better than super soakers !

Get off of my lawn, er FIRE ESCAPE, you dam kids!

"Most bars cater to the college crowd, which are most underage, especially that fauxrish bar near 7th and 1st. Would not be surprised if these kids just came from there. Thanks for stopping by, kids." Just because you can't tell the difference between a 20 year old and a 25 year old doesn't mean you can justifiably accuse "most bars" of serving minors. Just like if I said "most people in Rent Stabilized or Rent Control apartments are lazy welfare recipients cheating the government when they are perfectly able to get a real job'. Think before you spout, asshole.

I'm glad I graduated college because the 7th year looks pretty pathetic. Nobody wants to address the alcohol problem because a lot of people make money off of it. Until that stops, or there are enough high-profile alcohol related deaths, we can expect the fratmosphere of the East Village to continue business as usual. I hope he tore his salmon pants on the way down.

Thank God I'm outta there! (the EV). I put up with frat-house type behavior for years before finally becoming fed up: Karaoke parties, loud drunks in the hallways, pissing off the fire escape etc..

My bldg, when I first moved in, in the mid 90's, was a menagerie of colorful and interesting freaks. (And it still had front gates to deter "addicts" from sitting on the steps, which actually rarely happened.) From the early 2000's on, it quickly became a cross between a frat-house and a baby-stroller parking lot.

The EV is DONE.
Again, after reading this, Thank God I got out.
I moved to NYC to get away from these types, not live next to them.

i'm not into the frat/bro scene AT ALL, but dang, cut some slack to the youth! we all did stupid stuff back in the day!

I've had to climb mine drunk after forgetting keys before a night of grassroots drinking. Could easily impale yourself when falling. Not recommended.

I've had to climb mine drunk after forgetting keys before a night of grassroots drinking. Could easily impale yourself when falling. Not recommended.

If he isn't brain damaged, I hope he reads this and finds out that his friends were laughing about what happened to him. Then I hope he gets new friends.

An East Village bar for people who AREN'T bros and hos.

If you act and/or dress like a bro or a ho, you don't get in.

Enough with the whining about them. Do something about it.

Fuck 'em. I hope the kid becomes a permanent example to his "friends" of what not to do.