Big crowd trying to get 1954 prices at #veselka pic.twitter.com/2mRp0xU4dM

Officially long! Word is there are about 150 people waiting outside now to take advantage of Veselka rolling back prices to 1954 in honor of its 60th anniversary. The special runs from 6-6:54 p.m. There will be more of these 1954 specials, Veselka promises.

And here's a look at the line at 6:30 via William Klayer… 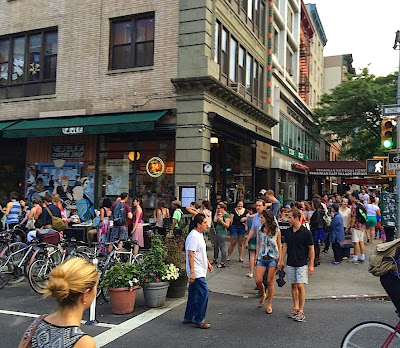 however, I am amazed that people find it worth their while to wait in that line (for how long?) to save a few dollars. Also, with a line that long, I assume many of them never made it in time for the 54 minute opportunity!

Bland, boring, normalcy. As far as the eye can see.
These are the people who also stand in the street, holding their phones up, to "watch" Manhattanhenge.

Veselka published 54 minutes but actually if you put your name down on the list they honored it....so it was really almost 3 hours of eating.