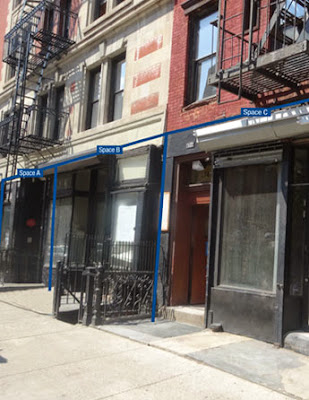 The retail spaces are now on the market over at 170-174 E. Second St., where landlord Jared Kushner has reportedly been using aggressive tactics to rid the buildings of rent-stabilized tenants.

Here's more info about the spaces between Avenue A and Avenue B via the RKF listing:

There isn't any mention of the asking rent, just "negotiable."

And this is a curious selection of neighbors. Black Iron is three blocks away on East Fifth Street and Snack Dragon is closing this week. And Il Bagatto is now delivery only.

Reports outline how Kushner Companies is aggressively trying to empty 170-174 E. 2nd St.
Posted by Grieve at 5:04 AM