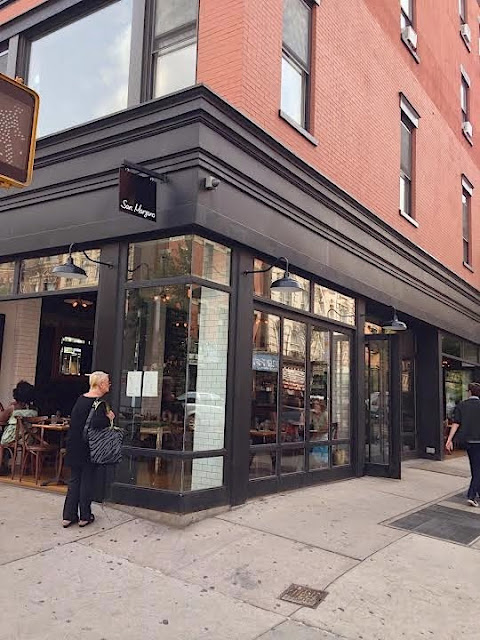 Back in January, a flood KO'd San Marzano, the 5-year-old pizzeria at 71 Clinton St.

It appears that the owners have ditched their pizza (they auctioned off all the equipment on Clinton Street) … for pasta at a new restaurant that they quietly opened at 117 Second Ave. at East Seventh Street. EVG reader Veronica Avanic noted that they were open as of Monday. 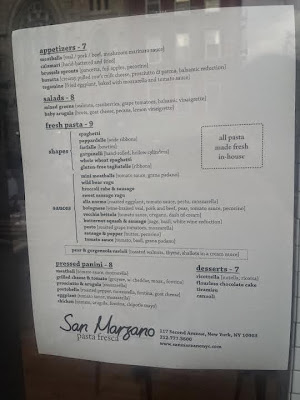 The menu appears to be affordable — the pastas are all $9, the most expensive food item on the menu … and there are three varieties of canned beer each for $3. You can find all the menus here.

This space was previously home to Picnic, which flamed out after just three months. And seemingly in another lifetime it was the Kiev.

A Picnic for Second Avenue

Picnic has apparently closed on Second Avenue
Posted by Grieve at 5:00 AM

First great opening news in a long while! This place is really good, and I was sad to hear they had issues with their former space... I can't wait to visit them again!

That menu is way too unpretentious - where is the grand tale of the farm to table journey the various artisanal ingredients embarked upon?

Also, the prices are affordable.

you sure they ain't lost?

Song 7.2 for sure, I think it was a different Korean place before that, too. It's like the same spot on 4th/2nd that has been a revolving door of italian/french/bistro restaurants in the past 6 years (Frutti De Mare, Belcourt, Calliope, Contrada)

Kiev was the best of them all, their pirogues and potato pancakes at 2AM were amazing. This location is very likely where the Egg Cream was invented, in a spot called Auster's Candy, back in the early 1900s.

The most common tale lays authorship at the feet of Jewish candy store owner Louis Auster, who ran a legendary shop at the corner of Second Avenue and Seventh Street in the early decades of the last century. This was a time when neighborhood soda fountains were more common than today’s Starbucks and functioned as local gathering places, each serving old-fashioned drinks like flavored phosphates, cherry colas, lime rickeys and fresh seltzer, often using homemade syrups.

Details regarding Auster’s creation of the “Ur egg cream” are fuzzy because the merchant, establishing what would become a long tradition, wanted it that way. According to Lionel Levy—grandson of Harry Harmatz, who was the founder of Ratner’s Dairy Restaurant and rented the space to Auster—Louis never allowed anyone to see him prepare the formula, and the Auster family, whose shop closed in the mid-1970s, has never revealed the recipe.

Another common yarn, largely unsubstantiated, is that 19th century Yiddish stage star Boris Thomashevsky created the drink after sampling something called a “chocolat et crème” during a Parisian tour. In this country, Yiddish tongues mispronounced it as something that sounded like “chocolate egg cream.” This story helps explain why Second Avenue, formerly a theatre district known as Yiddish Broadway, remains the heart of egg-cream culture: The frothy potable is on offer at Gem Spa, Veselka, B&H Dairy Restaurant, Stage Restaurant, the burger joint Paul’s Place, Katz’s Delicatessen and Russ & Daughters appetizing store. (The Second Avenue Deli— now perversely located on 33rd Street—was also known for its egg creams, and still serves short versions of them gratis as a digestif.)

We walked by on Tuesday night; it looks good, food smelled tasty, and the prices are very reasonable. We plan to go there this weekend.

As a neighbor living close by - will try it!

Otherwise - still wonder what happened with PicNic who was at this venue before.

Their selection of American food, craft beers etc was pretty interesting and the all-you-can-drink weekend brunch mimosas for $10 a catch.

I know NYC restaurant business can be pretty brutal and competitive, but strange how they seemed to be open only for three months or so.

For the record though, I liked Picnic.

I stopped by there the other night and they all shouted at me that they were closed, go away. Okay, when do you open? Five o'clock, go away, go away! So I did, and immediately asked someone on the street what time it was, and he told me 5:04. So fuck you, Marzano! Won't be back, at ANY time of day.