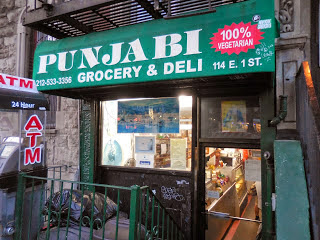 As Jeremiah Moss first reported back on Wednesday, the never-ending construction along East Houston has put a big dent on business at the 20-year-old Punjabi Grocery & Deli on East First Street.

Gothamist has a feature on the situation as well.

A favorite of hungry cab drivers in search of good food and a spot to rest between fares, the span of East 1st in front of Punjabi between 1st and A was once lined with the parked yellow cabs of satisfied customers. Now that span is home to a battered cement median, some orange cones, and not much else.

Given the lack of parking, cab drivers have to go elsewhere … and miss out on Punjabi's inexpensive vegetarian fare. ($5 gets you a very large portion of food.)

So, in case you didn't hear ... Punjabi started an online petition asking the commissioner of the Taxi And Limousine Commission to approve a taxi relief stand at Avenue A and Houston Street.

You can find the petition here. (We posted about this on Thursday.)

Meanwhile, an EVG reader told us the following on Friday about the work along East First Street. "People have basically given up, and assume that this construction will go on forever," the reader wrote in an email. "It's very hard to unload a cab since stopping effectively stops all traffic on the block. This situation is especially hard on residents who cannot park on their own block and load bags, etc."

Yesterday morning, the street was closed for construction. 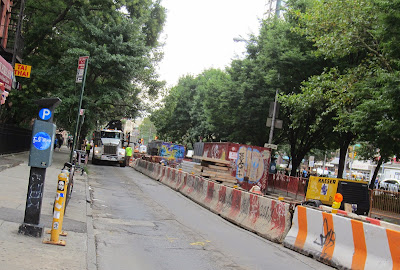 The reader also noted what looks like a grill amid all the construction materials. 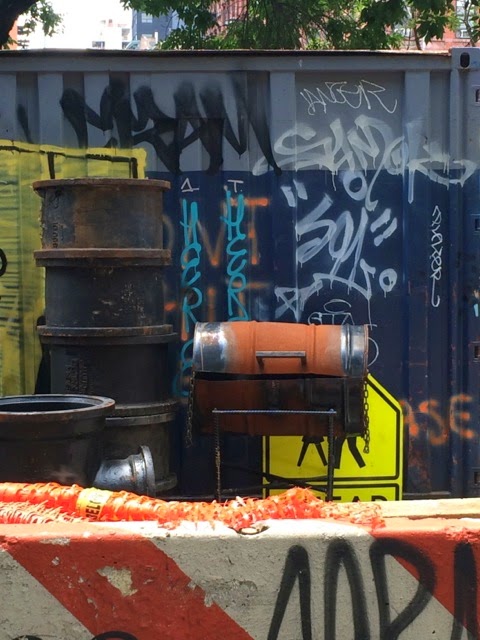 "It's very hard to unload a cab since stopping effectively stops all traffic on the block. This situation is especially hard on residents who cannot park on their own block and load bags, etc."

Cry me a river! Most of us do just fine not just without parking on our own block, but without a car in the first place. I do feel for Punjabi and try to support them whenever I'm in the area, but this whining about loading bags etc. has got to stop. Even when there is no construction, people who feel such entitlement to "their own block" happily double-park, making moving around harder for the rest of us. I especially love being stuck on a bus, with many fellow passengers, behind a private car whose owner feels they can block the street "unloading bags" or waiting for someone.

Attention first two anonymous commenters: a taxicab is a kind of automobile. This establishment is popular with cab drivers. They cannot get there because the road is closed off.

It's a shame that NYC doesn't really put into consideration the business affected when they repair the roads. The city doesn't give a shit. All they to is pave, repave, open, pave, repave and repave the roads again all the while we pay for the fat retirement pensions they will get while us common folk continue to struggle.

Attention commenter #3: The first two anons were talking about the resident who said folks living on the block were complaining about the lack of unloading space, and it's assumed this set of people is completely distinct from the cab drivers who would stop at Punjabi.

Can't the cabs park along Houston? I mean, aren't they doing that, already? So this big ridiculous construction project doesn't mean there's NO parking within range (BTW there's a pay-to-park lot half a block away on Essex too), it just means that there's not appealing front-door taxi parking at the entrance to Punjabi. Not the first time we've heard that line:
http://www.dnainfo.com/new-york/20100816/lower-east-side-east-village/east-village-stores-that-cater-cabbies-bitter-about-new-bike-lanes

It would be nice if the city could maintain quick parking for taxis i front of businesses that serve them. But let's face it, even if there was room for it right now (and there does not seem to be, as long as that ridiculous project carries on), we'd have better uses for the space. I'd rather set up a bollard-protected green plaza there, no matter how dinky it might be, than to lose more East Village real estate to a use that it needs the least. What's good for one business might be bad for the neighborhood... and being used as a taxi luncheonette, that's definitely not the best use of the space.

Meanwhile the actual project over on First and 1st is a gigantic mess, and I know both situations are frustrating but I don't know how Punjabi's pull-up space gets more priority from anyone in the neighborhood than the gaping pit at the dig site that has caused so much traffic and misery. The city has really screwed this up by letting this drag on for so long.

more importantly, what the fuck is going with the construction of Houston Street and when will it fucking end ?????

This area is a miniature version of the disaster also known as the 2nd Avenue subway, it has dragged on way too long and is killing off local business, except for the people who consider chain stores local businesses. Punjabi Deli has great samosas, delicious affordable foods, but the construction barrier right in front of the store prevents cabbies and other customers who drive by from making a quick stop. The City could make a taxi stand there but that would take away other parking. The only solution is to finish the project and remove the barriers asap.

This city is going to be pretty incredible when they finish building it.

This city will be pretty incredible to the dull bland yunnies and moneyed transplants and Bloomberg's godsend billionaire when they finish building it. And by the time they finished building this, last commenter before this will be priced out or his/her funds have run out and have moved back to mommy and daddy's basement in the suburbs at the age of 40+.