[Updated] About the guy looking for a girlfriend 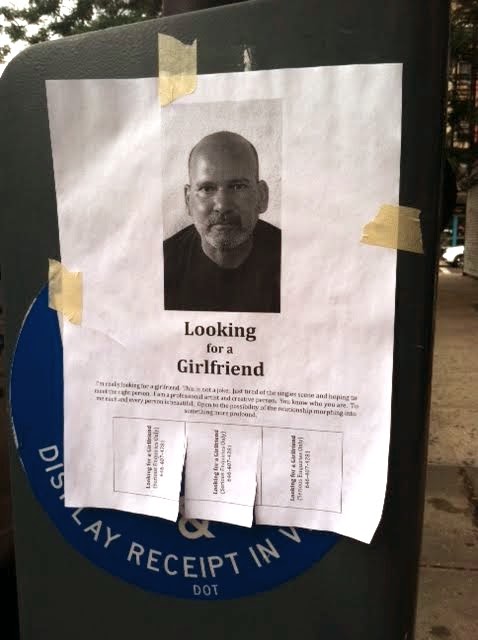 Well, these flyers are everywhere. We planned on ignoring them, figuring it was some kind of wacky marketing campaign or something really stupid. Stupider.

But apparently they are for real, or at least that's what he wants people to believe.

Here is WCBS with the story:

Dan Perino is on a mission. He’s looking for a girlfriend in a non-traditional way, plastering posters all over Manhattan.

“I’m not desperate. This is a better way to meet women. I want to find a more meaningful relationship,” Perino said.

Sick of the singles scene, the 50-year-old is taking his search seriously. He started putting the fliers up and in just hours he said he received more than 100 calls — some genuinely interested, others thinking it’s a joke.

He said he plans on having a girlfriend within a week. The above story is from Friday. So, by this Friday... we'll have some more summer loving!

And then there is this award-winning bit of video...

Right! An EVG Facebook friend reminded us that he was looking for a film role a few weeks back. What will he be looking for next? 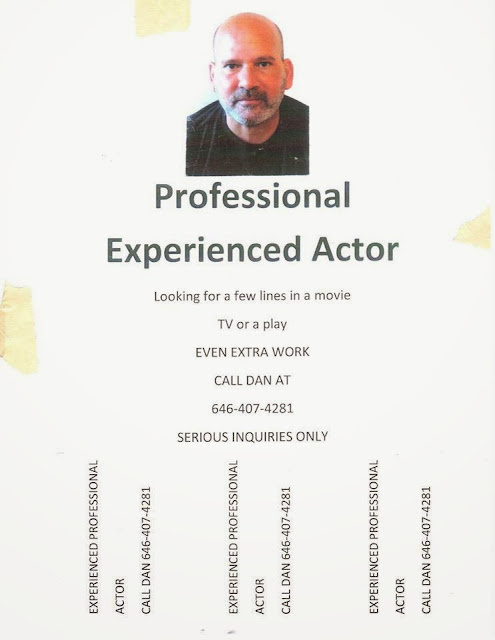 This may be the first time in history that true love sprung from a desperate looking guy's passport picture being taped to a few hundred of light poles. Or maybe it won't.

Pffft. This kid did it first, and much better IMO. Accept no imitations.

I saw a real life guy last week sitting at the corner of 14th street and 4th avenue, holding a sign saying he's looking for a wife. He's looking for more commitment than the poster guy, apparently.

What will he be looking for next?

If everything works out with the girlfriend, a divorce attorney is always a possibility.

On my way back!

Interesting that the love poster makes no mention that he's an unemployed actor.

This guy must be desperate. Pathetic.

Grieve, you fell for this attention whore. I'm ashamed of you. If I give you $15, can I have the last 18 seconds of my life back?

Check is in the mail

I hope he finds a girlfriend.

I also hope he gets fined for spamming the neighborhood with his flyers, and gets to do community service scrubbing stickers from light poles.

Let's be honest, flyers are just 1994's version of Tinder.