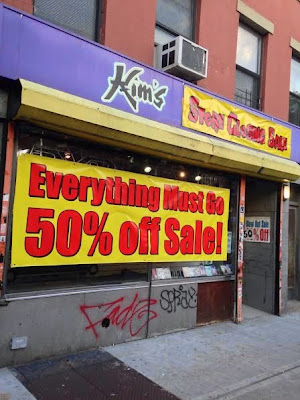 Kim's received the Sunday New York Times Memorial treatment with the somber headline "Passing of a Video Store and a Downtown Aesthetic." (The subhead: "Kim's Video Closes and a Village Sensibility Dies.")

As we first reported on April 21, owner Yongman Kim is closing the last of the Kim's here at 124 First Ave. ... perhaps as early as this week ... or into August.

The article includes thoughts from Richard Hell, Alexandre Rockwell and Darren Aronofsky, among others.

Pressed by higher rents, Mr. Kim said, he plans to close the First Avenue store at the end of next month, 27 years after he opened the first one, on Avenue A, in 1987. But this is more than a story of rising rents and the disruption wrought by digital streaming. It’s the tale of a downtown culture now largely lost, one in which clerks and creative types mingled, influencing one another and the scene as well.

Mr. Kim is taking business classes and plans to return with the Kim’s brand in some way. He’s also thinking of moving back to the Lower East Side from New Jersey, where he now lives.

He’d be returning to a different downtown.

“Manhattan in the 21st century is this Disneyland for the superrich,” Mr. Hell said, even though he cautioned against romanticizing the past. “New York in the ’70s was more like the reality of human existence. And you need to know what the world is really like to make good art.”

Speaking of a downtown aesthetic, I knew this guy who would go in the Avenue A location and ask for the worst movies ever made, like "Leonard Part 6," just to see how annoyed the clerks would get.

And here's a bonus photo from the EVG collection showing the back door at the First Avenue Kim's that leads out to ... 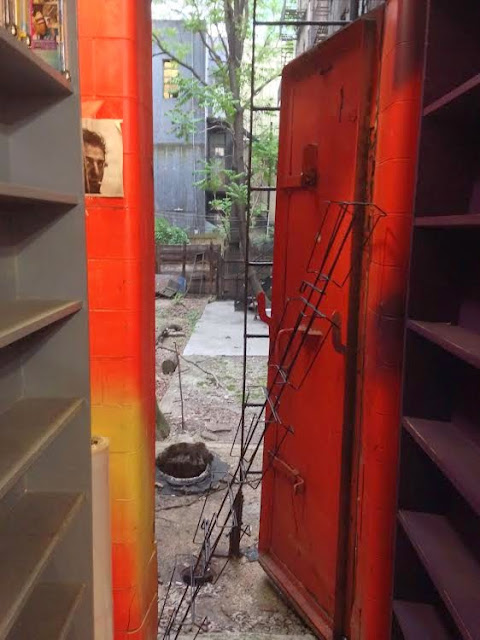 More about the closure of Kim's: 'We are NOT closing because record stores are dying'

Deeper discounts at Kim's as closing countdown continues
Posted by Grieve at 10:36 AM

I went to Kim's this past weekend looking for some bargain treasure I might find, but I've noticed that their selection or what's remaining in their shelves of the "underground", "eclectic" fand campy films are available on Netflix streaming, e.g. Dario's Argento's "Dracula", The Telephone Book, Russ Meyer's. And some of what was then underground films are now considered mainstream or not as obscured, such as Goddard, Ingmar Bergman, Antonini, etc. And even though the items are half -price, most of the items are still overpriced, I think.

It was a nice walk through to the past though. It was sad that the new generation won't be able to experience "this portal into New York City" and where "clerks and creative types mingled, influencing one another." Anyway I felt like I had to buy something so I bought the Veronica Mars movie just to see how the clerks would react after browsing for hours and that was the only thing I picked-out. Also was my contribution to that Kickstarter project.

The article says that Kim owns the dry cleaners on Avenue A--the one between 6th and 7th I guess?--and that the video store started there. I never knew that. Does he still own the cleaners?

Ebay is the winner, too. I see no reason to pay extra for dvds I could get online for less.

It's a new age and that age is online shopping.

When you think about it, it's actually a good thing. 'Say you happen to be in the East Village and drop in Kim's. You see a dvd you want, but it's $14.99. You take out your phone, check Ebay, see it's $9.99 with free shipping there, and buy it. Boom, $5 saved you could use to either buy something in Kim's or somewhere else in the neighborhood.

NYT is now on the EV grieving bandwagon, if a little late. It is a poignant article but I think the reaction is scant because people are moving/have moved past the grief stage. The hey-days of Kim's East Village were over several years ago.

It's also sad that Kickstarter has been taken over by rich celebrities too cheap to finance their projects with their own money when it was intended to be used by poor artists to raise cash to make things without corporate support. Now the only way you can raise money on Kickstarter is to already have rich friends.