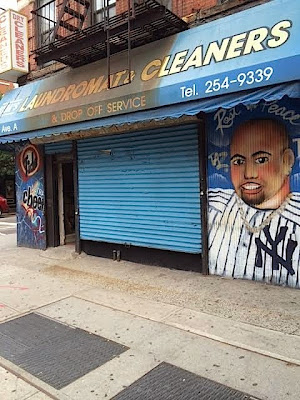 Kim's Laundromat & Cleaners on the southeast corner of Avenue A and East 13th Street closed yesterday, a victim of a rent hike, according to EVG reader dwg.

Workers were inside cleaning out the space, which has been here a good 30 years. 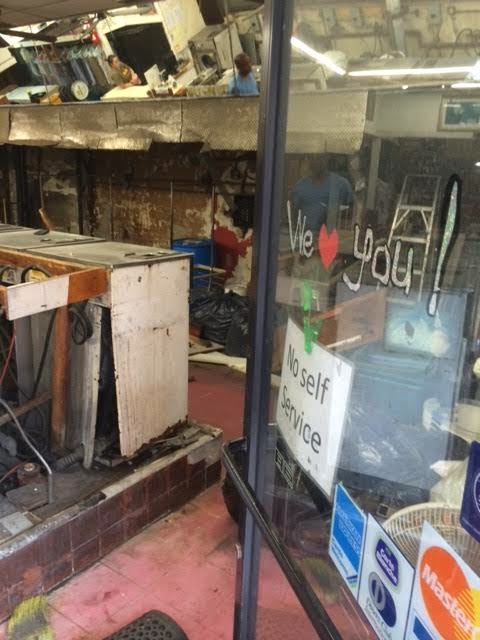 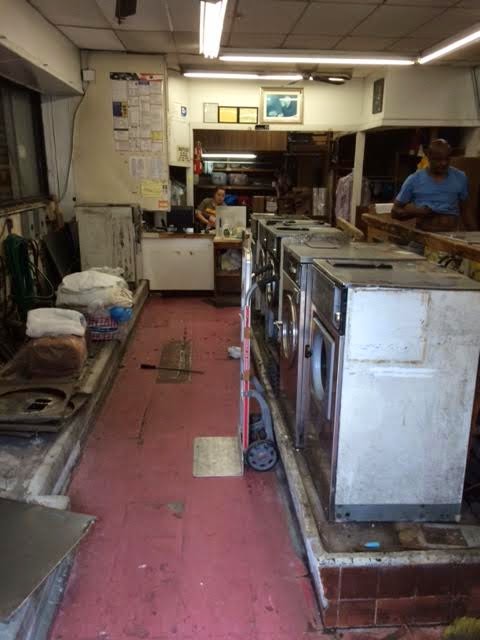 No word just yet on a new tenant. (Maybe it will stay a laundromat?)

In November 2009, Chico created this tribute to Eric "Taz" Pagan outside the laundromat. 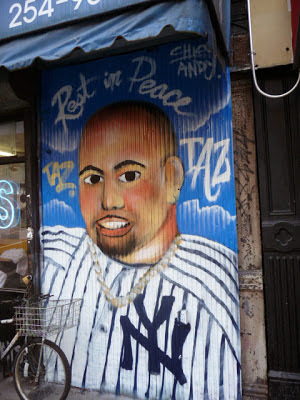 Pagan, a bouncer at the former Forbidden City lounge on Avenue A, was shot and killed trying to break up a fight on Aug. 23, 2009. Pagan was not on duty at the time of the shooting. He was 42.
Posted by Grieve at 5:10 AM

I wonder if it hurt them that they stopped being open to the public. I went there for years then I was told I could only leave my laundry and have them do it. I don't know if they were still operating that way when they closed but I would have remained a customer if they hadn't turned me away.

This is a shame, the space is too big to continue as a laundromat my guess is yet another bar or foot joint, perhaps artisanal "sloppy joes" or "hot pockets".

Are all these sources credible? Are they sure its a rent hike? Makes sense but is there any way to confirm? Everyone says it. There could be other reasons like only being drop off. I hate to say this but to be.honest I like having.a washer/dryer in my apt.

The proprietor of the laundromat said that the closure was due to a rent hike.

Sorry about that . I just wonder how accurate.sources are.

From my memory that place use to be an antique shop, plumbing supply and a pool hall but Kim was in there the longest. He opened the laundry when he had the green grocery on Ave. A between 7th and St.Marks.

I went away for 5 days and between this and the Burger Klein sign I'm returning to a changed Ave A.

Before they went to drop off only they gave free soap. Even when they had public washers it was too small and it was hard to fold comfortably. Losing more services is aggravating. I am afraid of what's next here.

There are at least 6 other wash and fold places within a 5 minute walk, including one less than a block away and another a little west on 14th st. Sucks to see very established places get booted out, but I feel like wash and fold places are no better for the neighborhood than dollar pizza places.

It's too bad they went the drop off only route. I liked going there back in the day. The free soap was great!

I went there once around 1999 or 2000 and they would kind of .. well let's say kinda inhospitable to people doing their own laundry. Wash N' Clean on 14 forever, baby. Although obviously not looking forward to whatever dirty hippie pork-based nonsense is coming next.