A visit to ANNA on 5th Street 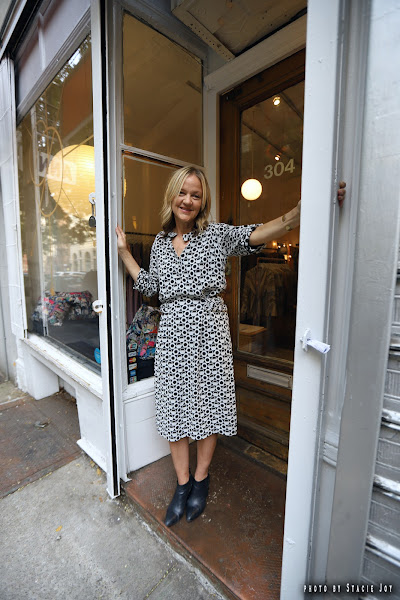 Dress shopping is not my strength, but ANNA owner/designer Kathy Kemp and stylist/collaborator Rebecca Kaye are welcoming, stylish and intuitive — just like the boutique they helm.

The shop’s clothes are designed and made in NYC, and Kathy jokes that the boutique is especially for people like me who don’t like to shop.

ANNA moved to its new digs this past spring at 304 E. Fifth St. between First Avenue and Second Avenue. Kathy kept the old charm of the space (exposed brick, original window, old wood door) and also updated the interior with a spacious curtained dressing room and some nooks that hold jewelry and accessories.

The shop smells delicious — a custom scented candle that is also sold at the store helps create a mood. Comfy window seat up front for guests, plus pretty lighting and a hand-painted artwork complete the experience.

She and Rebecca talk to me about the history of ANNA across its various locations, what the store looked like in the 1990s when it was on Third Street near Avenue A, and what it’s like to be back home in the East Village ready to celebrate 25 years in business. 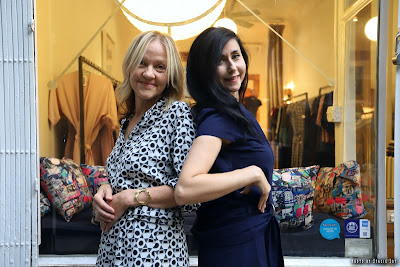 What is the history of ANNA?

ANNA started when I moved to NYC from Philadelphia in 1995. I had approximately $3,000 saved and no plan. A friend gave me the advice to “do what I love” — I had always loved sewing, shopping and street style and had been sewing my own things for myself and friends for years so I decided to open a store for couple of years just see what it was like.

Anna is my middle name and also the name of my grandmother who taught me how to sew. I’ve always liked that name, so symmetrical and also a palindrome. And familiar to everyone. I’ve always tried to have something for everyone.

Can you share of few memories of opening your first location on Third Street in 1995? Your rent was $600 and the previous tenant was a bike shop that wasn’t really a bike shop?

I randomly chose a space on Third Street between Avenues A and B because I liked its square shape and large window. It seemed very modern. Also, it was super cheap so I could afford it. I was lucky to land in the middle of so many writers, stylists, artists and all-around beautiful people.

Before cell phones, everyone walked around in all kinds of weather to procrastinate, socialize, and just to check out what was new so people were always stopping by. I remember painting the floor a few days before I planned to open. The racks were already up and there were clothes hanging on them. People were coming in and skipping over the wet paint to buy clothes. I didn’t actually get to finish painting the floor until the second year.

The space was previously a “bike shop” that wasn’t really a bike shop but it did have a big pile of broken bikes in the middle. The bike pile covered a giant hole in the floor that went all the way down to basement! Besides that, and the smashed-up bathroom, it was perfect. Just needed a floor, some paint, and lots of cleaning. I remember thinking the walls and window looked like the inside of a dirty bong...especially the window, it was completely brown and pretty much opaque.

There was graffiti spray painted all over. The only thing I remember about the graffiti was word “trems” on the ceiling. I wish I had taken photos and would love to see some of anyone has any. For years people came in asking if the store was a bike shop and I’d direct them to the tire shop down the block where the bike shop guys moved. It was always the same dialogue:

After the tire shop closed the operation moved to the phone booths on the corner. Someone would pretend to use the phone and leave a small paper bag package. Shortly after someone else would “use the phone” and pick up the bag. Never saw anyone using this phone booths to actually call someone. They were pretty dirty. 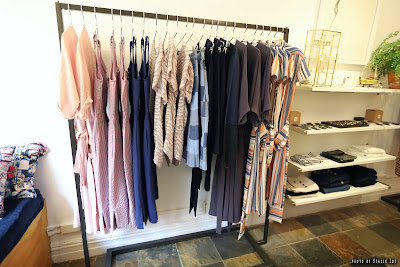 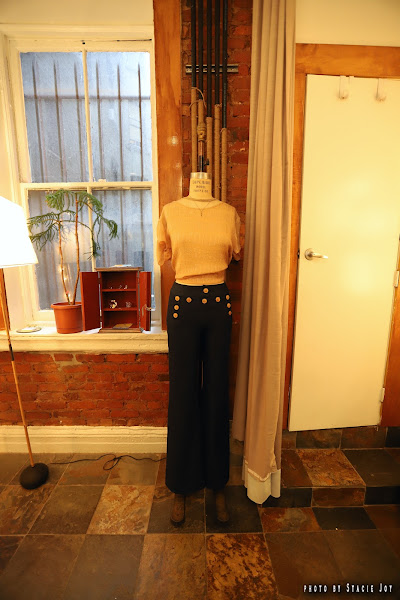 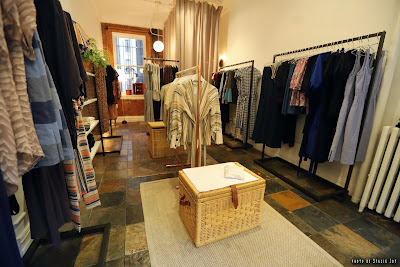 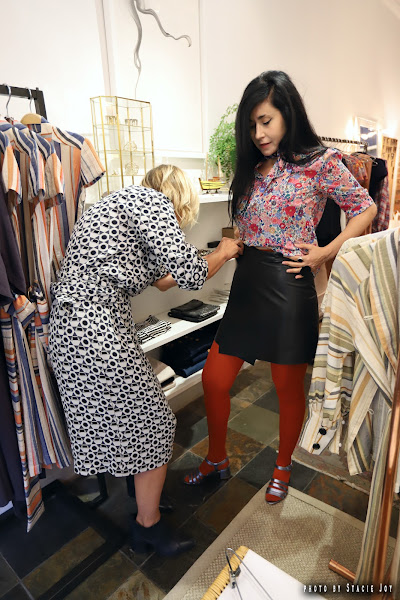 What prompted the move from Third Street to 11th Street?

You left 11th Street in 2017 for Christopher Street in the West Village. Why did you decide to move there?

Christopher Street was a store called Albertine, owned by my friend Kyung Lee. I’ve always loved that street and store and admired Kyung and what she was doing and always wondered what it was like over there.

The ANNA clothes sold well there. Lots of ANNA people live in the West Village and were happy to have us, and most East Village people crossed over for us. The tourists over there are definitely different. There are lots of families AirBnB’ing and most shoppers are looking for trends, something we don’t get involved in. Tourist shoppers in the East Village are generally looking for something new and different.

We are so happy to be back in the East Village for our 25th anniversary! I feel lucky to have landed on one my favorite blocks with great neighbors. David Brockman, who owns Honeymoon Vintage, called me to tell me about the space before it became available for rent. We had bumped into each other on the street and I mentioned that I was looking. He really helped me out because he wanted ANNA back in the neighborhood.

These days it feels like Fifth Street is like the Nolita of the East Village. White Trash has been a destination for so long. I remember the shop and Stuart Zamsky, the owner, from when I first opened on Third Street. Tamam, the shop right next to us, is a beautiful home-goods wonderland owned by three artists who buy and design gorgeous textiles and prints. Both of these stores are no BS, authentic New York stores filled with treasures you can’t get anywhere else.

Yes, there are too many [chain stores] but less than most other places and, as a neighborhood, it still has a lively, local feel. When my son was younger, every time we left and came back, he’d sigh, “back to civilization.” I’ve always felt that way, too. It’s still a neighborhood where people support those who do their own thing.

I’m not sure if I can be objective about what it is right now compared to what it was. We just had the busiest spring we’ve had in years. People came from all over dressed in their favorite ANNA clothing to tell us how happy they are to have us back. We’re feeling like things are OK these days.

Can you speak a bit about your typical client, if there is one? What, if any, are the differences between East and West Village patrons?

The customer base has grown so much over the years that it’s hard to describe who my “typical customer” is. These days we ship around the world and often have mothers and daughters shopping together. I hear of therapists and patients wearing ANNA and people meeting all over because they’re wearing the ANNA clothes. I see people all over the city in my clothes and get an occasional thumbs up.

So I guess we managed to be global and underground at the same time. We’ve had our share of press but the clientele has grown mostly because of word-of-mouth. It’s been said that ANNA is the kind of store you only share with your best friends.

We also hear that ANNA is the perfect store for people who hate to shop because it’s more like stopping by a friend’s studio or hanging out in a stylish friend’s bedroom. One thing all of the customers have in common is that they’re open minded enough to go into a small store and try on the clothes.

These days, also, people who care about sustainability and quality. Everything is sourced, designed, and produced in NYC and nothing goes to waste. We sell all the samples and leftover pieces in our half-price bin and return any plastic hangers to the production place. I’m proud to say that we have no trash at the end of the day. I’m also proud to say that so many friendships and collaborations have started at the store.

You mentioned you have five years left on your lease, what’s next for the shop?

We are interested in doing more prints. Rebecca and I are working on one now and in the future, I’d love to do more with neighborhood artists, maybe art shows and/or prints.

As for future plans, things have a way of presenting themselves spontaneously here at ANNA, especially in the East Village. We’ve been talking about MANNA—ANNA for men for years and who knows what else will happen? 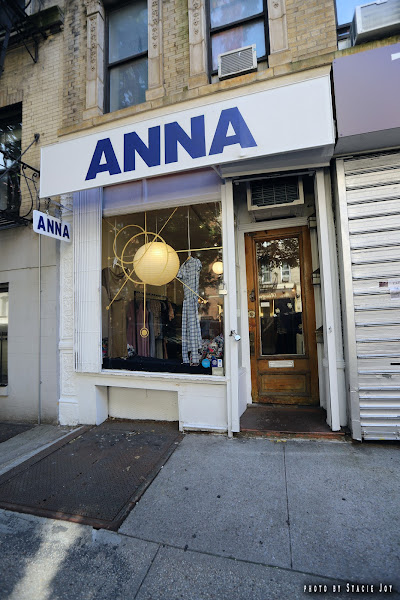 You can keep up with the shop on Instagram here. ANNA's hours are noon until 7 p.m. every day.
Posted by Grieve at 4:30 AM

Email ThisBlogThis!Share to TwitterShare to FacebookShare to Pinterest
Labels: A visit to, Anna, Stacie Joy

Great interview Stacie! This is one of the best profiles yet.

Love having ANNA as a neighbor! They are a great addition to the block.

Can't shop there because I'm a size 16, :/ but when they were on E 3rd St they were in a building that a Triangle Fire victim lived in, and they were always gracious when we covered their sidewalk with memorial chalking on the anniversary of the fire. Glad they're back in the nabe.

I love this shop and have followed Anna for years so am glad to have them back in the neighborhood. Everyone should stop by and support this local business that sells clothes made in NYC

I have three regular stores in NYC that I shop at, and this is one of them. I even make the trek all the way from the upper upper west side to do so. So happy stores like this still exist! <3 #supportsmallbusiness