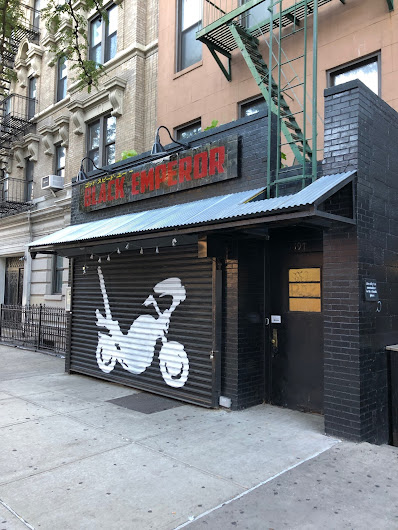 Gov. Cuomo recently announced that the liquor licenses of 33 more NY State bars and restaurants have been temporarily suspended for what he has termed "egregious violations of coronavirus-related regulations."
Of those 33, one was in the East Village —Black Emperor at 197 Second Ave. between 12th Street and 13th Street.
Here's what the SLA said in its statement:

On August 31, investigators with the state's multi-agency task force observed in excess of eight patrons standing, drinking and congregating in front of the licensed premises. Inside, investigators observed three patrons sitting and drinking at the bar and one patron standing inside with a drink in his hand, all in flagrant violation of the Governor's Executive Order in place since March 16, 2020.

Updated 11 a.m.: Several readers have noted that Black Emperor had previously announced plans to temporarily close the bar after service on Aug. 31.

Meanwhile, two other East Village bars-restaurants that had their licenses suspended by the SLA last month are back in service.

Maiden Lane on 10th Street and Avenue B resumed service with alcohol and expanded food offerings on Sept. 10. (They did reopen after their license was suspended in early August for food orders and a non-alcoholic drink menu.)

The Hairy Lemon, 28-30 Avenue B between Second Street and Third Street, also had its license reinstated after nearly six weeks of closure.

Black Emperor announced on August 26th already that August 31st will be their last day of service, at least for now. So the raid happened during their closing party...

Liquor sales need to be suspended at 9 pm. The young drunks are now herded into backyards and fire escapes until all hours, without restraint, as they are entitled to do so. It is a rite of passage whose time has passed, and morons playing beer pong at 2 am screaming in the backyards are just one more gift from the gentrifying landlords who aren't even from NY.

Can't wait for the end of the month and indoor to reopen.

@10:02am: Absolutely right about the insanity that is going on in backyards, on fire escapes, and on "party roofs". Landlords should be required to live in their most bro-friendly building.

I live near the black emperor. The street around it was completely filled with people several times (like 50ish). Personally I don't care much (though the blocking if the entire street to the extent it was, literally, like walking through a bar, was annoying).

I remarked to myself several times that it was going to be shutdown soon. A friend of mine thinks maybe they just figured to make as much money as possible fast because they knew they were going to close anyway. Out with a bang rather than a whimper!

Two ways to curb this 1.) cold weather 2.) opening up bars fully. I think young 20 something’s will learn to stock up before 9pm.

25% and even 50% capacity won't save you from outdoors mayhem, winter will.

They still would have to pay that 10K fine, and lawyer fee, otherwise the principals won't get a liquor license under any other LLC in the future.

You are confusing artistry and creativity with dumb Ohio bro life.

ah yes, they should have needles in their arms not white claws in their hands.

I wish the Hairy Lemon never came back. That type of college "woooo!" douchery on Avenue B is mad annoying.