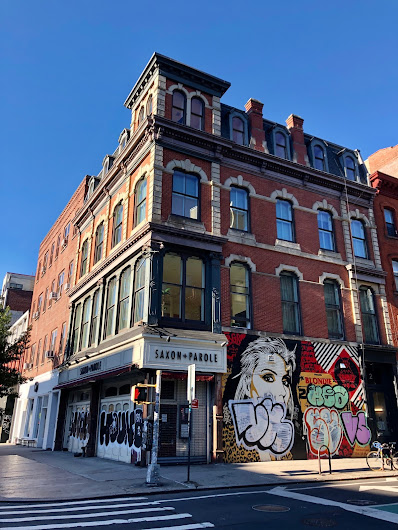 Several readers have asked about the status of Saxon + Parole on the high-profile Bleecker-Bowery corner. The restaurant is one of many in the neighborhood that has remained dark since since the PAUSE went into effect in March.
The self-described "equestrian-themed American eatery" has not been open for six months ... ditto for its mezcal bar Ghost Donkey next door... 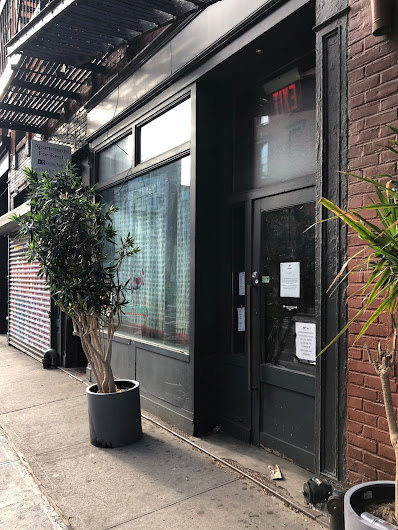 Saxon + Parole reps have not responded to multiple requests for information on its status. OpenTable lists S+P as permanently closed.
The space was looking more abandoned as the summer progressed — the plants on the sidewalk cafe space dried up and were eventually discarded... the storefront has been tagged several times in recent weeks (the top photo is from Sunday) ... 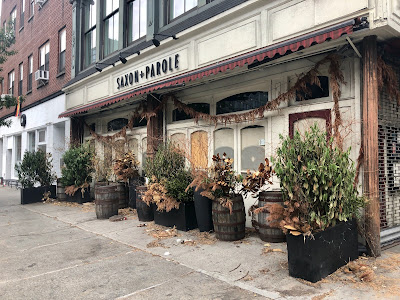 In more positive news for the company, AvroKO Hospitality Group, the Saxon + Parole outpost opened earlier this month in Auckland, New Zealand.
A pop-up message on the S+P website suggests the Bowery location may return again some day:

And with one dream coming to fruition, another one comes to a pause. Our NYC locations of Ghost Donkey, The Poni Room and Saxon + Parole are temporarily closed due to COVID-19. It has been a pleasure serving you, and we hope to do so again soon.

Email ThisBlogThis!Share to TwitterShare to FacebookShare to Pinterest
Labels: closing 2020, Saxon and Parole

The Bowery - where dreams go to die. I'd rather be in New Zealand right now.

@9:29 Actually it used to be called The Bowery, Where Dreams Go To Die, but almost all of the dreams The Bowery ever had are dead now, so perhaps now it’s Dream Heaven, or Dream Hell. Other than most of midtown Manhattan, Fifth Avenue, Broadway, Tribeca, NoHo, LoBro and SoHo, I cannot imagine a worse place to have a retail business right now.

Saxon and Parole charged $18 for a Stoli/soda 10 years ago.