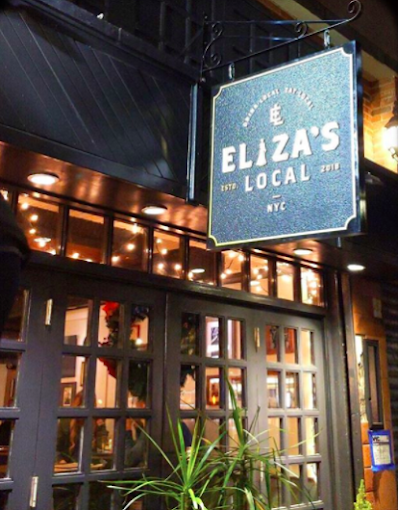 An all-too-familiar set of circumstances are behind the bar-restaurant's closure: "Unfortunately, we had no choice with the current situation, our landlord and no inside dining," a rep told us.

Eliza's had been open in the early days of spring, selling beer to go (and giving away bread). They later had some expanded outdoor dining space with the closure of St. Mark's Place on weekends for Street Feast. Still, it wasn't nearly enough volume to overcome the drop-off in business.

The bar, which opened in December 2018, was named for Elizabeth Hamilton (aka "Eliza") co-founder and deputy director of the first private orphanage in New York City. She was the wife of Alexander Hamilton. She lived next door at 4 St. Mark's Place in what was later known as the Hamilton-Holly House.

This space adjacent to the entry of the St. Marks Hotel was previously Ayios Greek Rotisserie, which quietly closed at the end of 2017 after 16 months in business. St. Mark's Ale House had a 21-year run until July 2016. And once upon a time it was the second location of the Five Spot Cafe.
H/T @unitof
Posted by Grieve at 5:00 AM

The mention of The Five Spot brought back a great memory. I moved to 2nd Ave in 1974. My girlfriend and I were living on a farm in Central Jersey. She was a modern dancer and I was played in a band, and acting in a children's theater group. She knew a couple who were divorcing, and looking for someone to take over their lease. I didn't know one neighborhood from another in NYC, and was very fortunate to land in the heart of the East Village. My girlfriend had fallen in love with one of my Charles Mingus albums, and choreographed a solo dance piece to one of his compositions. Her work was very well received, reviewed in the New York Times, and opened up doors for her in the then flourishing modern dance scene. We excitedly walked around the corner to watch Mingus perform at the Five Spot. What an experience! He was a huge, bear of a man, and he attacked his stand up bass with ferocity, yet delicate musical precision. The Five Spot was a treasure, and the East Village was electric.