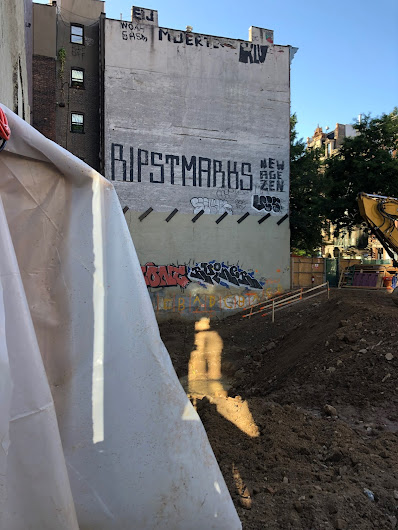 The final public hearing on the application to allow the air rights transfer to increase the size of the office building under construction at 3 St. Mark's Place is expected to happen on Sept. 24. According to Village Preservation, the hearing originally scheduled for today was postponed.
Per Village Preservation:

In spite of overwhelming public opposition, in late August the City Planning Commission (consisting of appointees of the Mayor, the five borough presidents, and the Public Advocate) voted unanimously to approve the air rights transfer, adding thousands of square feet to the planned boutique tech office tower at this corner, long dubbed "the Gateway to the East Village."

However, to proceed, the transfer needs the blessing of City Council, and local CM Carlina Rivera already publically stated her opposition in early March.
As we've been reporting in recents months, work has already commenced on the northeast corner of Third Avenue and St. Mark's Place, site of a future 10-story office building with an aggressive February 2022 completion date.

REEC picked up the 99-year leasehold for the properties here for nearly $150 million in November 2017.

• Concern over potential air-rights transfer for new office building on St. Mark's Place and 3rd Avenue
Posted by Grieve at 5:30 AM

The space, if allowed, will end up with a lot of empty space that won't give the owners the return they are hoping for....not in this environment. In two years, when it is ready for move-in, there will be so many empty commercial office spaces available that the price point will be prohibitive or they will have to lower their expectations big time.

Thanks for sharing this important update. Send an email at the link in our bio or here: https://secure2.convio.net/gvshp/site/Advocacy?cmd=display&page=UserAction&id=231