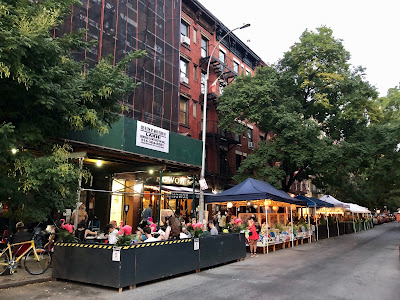 And in news you likely read about yesterday, Mayor de Blasio announced that the City's Open Restaurants program will be extended year-round and made permanent. The extension also applies to Open Streets: Restaurants, which provides restaurants expanded space on 85 car-free streets citywide on certain days.

Here are some particulars from the city's press release about how restaurants will able able to protect diners from the winter-time elements:

As cooler weather arrives, the City will allow restaurants to incorporate heating elements into their outdoor dining setups. Electrical heaters will be allowed on both sidewalk and roadway. Propane and natural gas heaters will be allowed on sidewalks only; they will remain prohibited in roadway seating. Propane will require a permit from FDNY and compliance with FDNY regulations for outdoor use, handling and secure outdoor tank storage overnight. Official guidance on what will be considered approved installation and use of heating elements will be released before the end of September, and restaurants are prohibited from installing heating elements until guidelines are released and followed.

Restaurants will also be permitted to use tent enclosures to keep diners warm. In partial tent enclosures, at least 50 percent of the tent’s side wall surface area must remain open and electrical heaters are allowed. In full tent enclosures, the tent’s side walls may be closed but occupancy limitations will be capped at 25 percent of capacity, and indoor dining guidelines must be followed; electrical heaters will also be allowed. Enclosed structures, such as plastic domes, will be allowed for individual parties and must have adequate ventilation to allow for air circulation.

Finally De Blasio gets something right. There is a first time for everything.

I hope the restaurants can manage the heating bill, this will be interesting.

Those sidewalk dining areas are already looking more and more permanent, and some of them look great. Some blocks suddenly look like the Botanical Gardens with all of the plants and flowers. But with no propane or gas heaters allowed for the roadway seating, those electric bills will be sky high. Either way, all of this new equipment is a major expense for restaurants on top of everything else, and won’t work for every location. While some restaurants seem to have enormous crowds, others are fairly empty, depending on their location and setup. I’m not sure those tents will work very well during heavy rain and snowstorms, but I saw a lot of people inside of them last night trying to keep warm.

What the restaurants really need if they are to survive is more indoor dining combined with fast testing, where you would be allowed to dine indoors after passing a test, but we are not there yet, the tests are slow and expensive, and so far this is the best we can do.

Meanwhile, Florida is reopening to 100% indoor service for restaurants and bars, while the positive rate in Miami is 18% (ours is around 1%) and Florida had the most Covid deaths in the country yesterday while cases are rising. People constantly harping on DeBlasio and Cuomo while ignoring how poorly Gov. DeSantis in Florida and most other states and cities are handling the crisis prove that they are more interested in scoring political points than in ending this pandemic as quickly as possible.

On the surface sounds like a good idea but since a tent is an enclosed structure that may not allow for proper ventilation plus seating capacity will only be at 25%. Better than nothing I suppose and personally I don't mind eating outdoors in fall weather as long as I'm supplied a tipple or two.

Giovanni look at the death curves adjusted for population in NY versus FL. ‘The most COVID deaths in the country ... yesterday’ is a positively silly statement that doesn’t indicate anything.

I know I'm on the minority here... but this outdoor dining thing has really stressed me out as someone who has a car thats used 100% for work. I do work all over the area and US and as much as I'd love to not have a car, I have to transport things and there's just no way around it. Parking has gotten more brutal lately than it has in my near 15 years as a car owning resident. My neighbors for alliances with me then get mad if I help someone else out. I've also noticed tons more out of state cars and new parkers on my block in what I can only assume is a reaction to covid fear of subway and working from home. Its just really intense and apparently really screwing up/delaying street cleaning in general because everyone is so busy trying to box out their spot its a mess getting ot to actually work.
Okay I'm all for outdoor dining and ive done my part to support it as much as I can afford to. I just really really wish there was a better solution for all of us. And yes I've checked out garages but they arent terribly close and cost over half my rent. Maybe if my business was back at 100% I could afford them... but currently making a living means I need to park my car and parking my car is getting to be overly competitive and stressful with so many outdoor setups. I'll just suck it up and deal with it but not looking forward to what happens if we get a snow dump.

Not such a hot idea when you live across the street and they've got music playing that you don't want to hear. I say no music- people will come not matter what and it'll give those of us who are facing the restaurants a break. They don't need the music.

Good news finally, curb space used by people. The street is alive when inhabited by people and plants .
Now we need to remove car storage from Av B Open Street, make the street more inviting for people while providing curb access for delivery and utility vehicles and faster response time for emergency vehicles.

The Noise uggg the noise the din of people and the music in many of these places is REALLY REALLY LOUD i can't imagine trying to live within ear shot of these places oh wait ... I do :(

This is a quality of life issue and DeBlasio doesn't;t know what "permanent" means hopefully. Hi Mr. Mayor,

Thanks for your hard work.
I am concerned about the open streets program.
They close down streets which affects residents in many ways.
For example, it sounds like a noisy street festival outside peoples windows now, because of all the restaurants with seats in public space. It makes walking down the sidewalk an obstacle course, especially with a dog or kids. And it makes parking harder for hardworking people without garages, and disrupts the flow of traffic on roads that should not be blocked, like Avenue B.