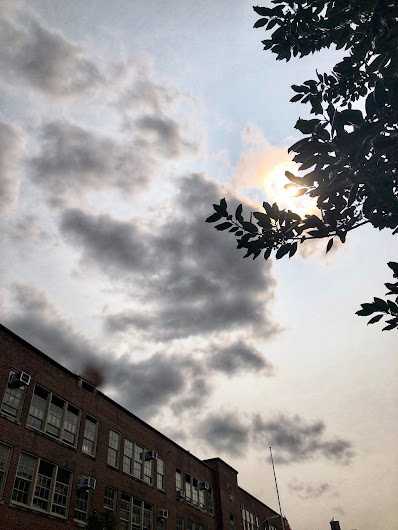 A view of the sun this afternoon along Avenue B between Fifth Street and Sixth Street.
As you've likely heard, smoke from wildfires in the Western United States reached NYC earlier this week, giving the sky a hazy and milky look during the day.

Upper level winds continue to spread smoke from the West Coast #wildfires across much of the northern half of the CONUS, reaching well into the Atlantic Ocean! Skies will continue to be hazy as a result. Meanwhile, #HurricaneSally is impacting portions of the Southeast. pic.twitter.com/LadTkwIs21

"Meteorologists expect the graying effect to be ... present until the smoke is eventually pushed off the coast by a cold front on Friday," Gothamist reported.
Posted by Grieve at 2:30 PM

Email ThisBlogThis!Share to TwitterShare to FacebookShare to Pinterest
Labels: smoke, the sun

Sally's not the problem, it's the other woman!

Gonna tell Aunt Mary 'bout Uncle John
He claim he has the misery but he's havin' a lot of fun
Oh baby, yeah baby,
Gonna have some fun tonight.

Long tall Sally, she's built for speed,
She got everything that Uncle John need,
Yeah baby, woo baby,
Gonna have some fun tonight.

Saw Uncle John with long tall Sally,
He saw Mary comin' and he ducked back in the alley,
Oh baby, woo baby!
Gonna have some fun tonight.