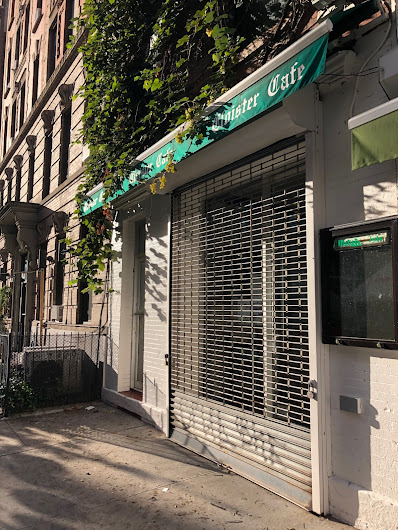 Cloister Cafe will reopen tomorrow (Tuesday, Sept. 15) on Ninth Street after a judge granted it a temporary restraining order against the State Liquor Authority, Page Six reported.
The SLA had suspended the Cloister's liquor license for alleged social-distancing infractions here between Second Avenue and Third Avenue last month.
According to the SLA report that led to the suspension:

Investigators found the restaurant operating as a nightclub and hookah lounge with a live DJ, documenting numerous patrons ignoring social distancing with lines of customers congregating in front of the premises without facial coverings, at least twenty patrons consuming alcohol indoors under a fixed roof, and no receipts for food purchases.

For their part, Cloister Cafe claimed that the SLA didn't properly investigate the alleged violations — and just copied the claims from a Gothamist article.
Previously on EV Grieve:
Report: Cloister Cafe owner sues state over suspended liquor license
Posted by Grieve at 5:00 AM

This is what's wrong with America -- money talks or whoever can afford to be litigious.

What's the point of the SLA if folks with money will just keep contesting their decision?

That's the way the $LA has always worked. And they don't care, because they don't have to live with - or even near - the consequences.