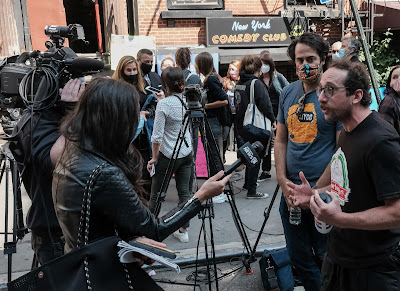 In case you were wondering about all the media activity outside the New York Comedy Club on Fourth Street yesterday (thanks Derek Berg for the photo!).
Comedy club owners as well as comedians and assorted elected officials gathered here between Second Avenue and the Bowery to ask the state to let them safely reopen.
Organizer Kambri Crews, the owner of venue Q.E.D. Astoria, had this to say, as reported by Gothamist: "We are holding this rally to ask New York state to give live entertainment the same consideration they've given other industries... For over six months, there's been no rent relief and no plan for us to reopen. New Yorkers can go indoors to the gym, bowling, go gambling in casinos, [but not] a comedy club — it makes no sense."
Their request of Gov. Cuomo: Allow for venues to be able to allow ticketed outdoor live performances (with fewer than 50 people), and either allow clubs to resume indoor shows at 25 percent capacity (similar to restaurants) or at 50 percent but without food and beverage services (similar to bowling alleys).
A Cuomo spokesperson told Gothamist that they hope "to put together guidance where these performances can resume in a way that also keeps New Yorkers safe."
Vulture has more coverage here.
You can read the New York Comedy Coalition's reopening proposal at this link (Google doc!).
Posted by Grieve at 11:30 AM

Everything should be reopened at this point, after six months, with proper precautions and monitoring. Without contact tracing outbreaks can be addressed, venues closed again if necessary. But otherwise we’re condemning entire swaths if the economy to bankruptcy.

The length of the closing is irrelevant. No venue should be opened until we see the full impact of school openings, indoor dining, and winter.
Contact tracing doesn't work, not functioning. People give fake numbers or just don't pick up when they're called. Besides, you can't be economically saved with 25-50% capacity, when it comes to live shows. Other aspect is, comedy clubs are no different from any other performances venue, and if you let them open, you have to let all to open. Live music events, both seated and obviously general admission standing, are a sure recipe for superspreding.
We, people working in this industry, see what has happened in other countries and US states that have let shows resume, and we don't want to go back to work under the current circumstances. (Hint: look at Israel).

IF people behaved, IF people followed rules, IF people weren't selfish idiots, etc. we COULD HAVE HAD a ton of stuff re-opened already. This is what happens when people decide that THEY are the exception.

Indoor dining reopened three months ago in the rest of NYS without a rise in cases. So maybe we’ve learned something and can follow protocols. Plus, gyms have reopened. Massage parlors have reopened. Schools have reopened. If six year olds can manage this, maybe you can as an adult. If not, stay home, let the rest of us get on with it.

Ugh, someone pointed out that there is no rhyme or reason to anything. 100+ people packed on an airplane for 5 hours is ok but going to a restaurant for 45 min is not?
I mean a comedy club would be an even wiser move. Masks stay on for the most part.

@8:33am: No, "schools" haven't reopened. Only KINDERGARTEN has re-opened in NYC.

I'm beginning to think that reading comprehension is one of the problems we have big-time in this country - that, and everyone thinks they're "special."

I agree with 8:33, "If not, stay home, let the rest of us get on with it."
If someone cannot handle being out in the public without berating others for not following vague, inconsistant, fascistic rules, then stay away from places where people have the consitutional right to assemble.