A return for Tokio7? 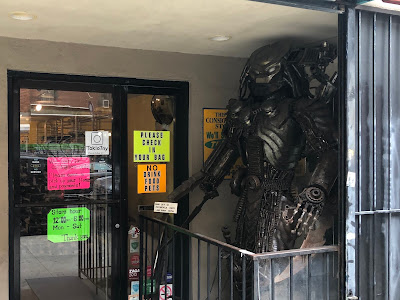 We've fielded a few questions about Tokio7, the longtime consignment shop on Seventh Street between First Avenue and Second Avenue. Back in late July, the store was only open for people to pick up items that they had been trying to sell. By Aug. 22, the shop had closed.
However, the closing seems to be temporary. Tokio7's last Instagram post mentions "starting a new leaf."
They also recently left a comment stating they'd (hopefully) be back later this fall...

In early June, Tokio7 was one of the many East Village businesses that was broken into and looted. (The  8-foot, 900-pound Predator statue out front did nothing to thwart the break in.)
Tokio7, which sold second-hand designer and vintage clothing, shoes and accessories, debuted on the other side of Seventh Street in 1996 ... before moving to this location in 2010.
Photo from Steven in August.
Posted by Grieve at 5:00 AM

Email ThisBlogThis!Share to TwitterShare to FacebookShare to Pinterest
Labels: Tokio7

Had no idea they were looted (and I live on that block). Terrible. Looking forward to their re-opening.