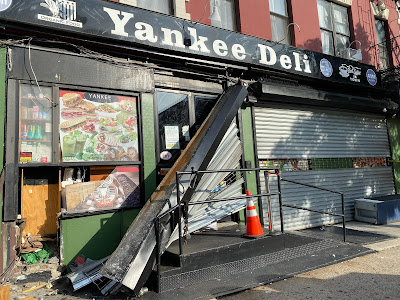 The NYPD reportedly arrested Brooklyn residents James Allen, 72, and his 45-year-old son, Ed Allen, early Wednesday morning after allegedly taking an ATM on Clinton near Rivington. They were eventually caught in a stolen van on 52nd Street after a chase.
Police believe they may be behind a spate of ATM thefts of late, including one from outside Yankee Deli on Avenue C at 11th Street on Aug. 14. In this case, surveillance video shows a van pulling the ATM from the storefront, which was said to cause $10,000 in damage to the deli.
According to the Post, the senior Allen has 11 prior arrests while Ed has 53 prior arrests. Previous charges for both include assault and grand larceny.
Photo from Aug. 14 by Vinny & O
Posted by Grieve at 7:05 AM

Apparently they don't know the city as well as they thought they do, as 52nd street, east of 1st Ave is a dead end street...

My dad just played catch with me in the driveway.

bagelguy--thank you --that is funniest thing I have read in ages.

With so many prior arrests for both, maybe these guys should give up being criminals. They are not good at it.