The latest obstacle for Punjabi Grocery and Deli 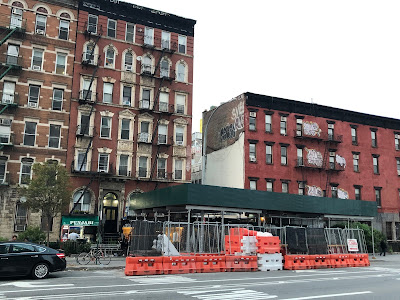 Punjabi Grocery and Deli at 114 E. First St. between Avenue A and First Avenue never seems to be able to catch a break when it comes to construction projects.
This week, workers erected a sizable sidewalk bridge for a 9-story residential building slowly going up next door. The hulking shed obscures Punjabi's neighbor, Hollywood Nails & Spa. During the day, the construction activity doesn't make this an appealing spot to walk by ... or dine on one of the benches outside Punjabi.
As previously reported, there have been concerns through the years about Punjabi's future. The never-ending East Houston Reconstruction Project finally wrapped up at the end of 2018 — just six years behind schedule.
For nearly nine years, the construction zone eliminated parking spaces for cab drivers, who were a sizable share of Punjabi's business, making it nearly impossible for them to stop in for a meal or break. Those who did stop faced getting a ticket. Plus, there has been an overall decline of cab drivers in the Lyft-Uber era.
Meanwhile, any remaining cab drivers will still have challenges stopping by ... the taxi relief stand that finally arrived in July 2019 along Houston Street has been removed to accommodate the ongoing construction next door.
This build has been a slow-go to date. The plywood arrived in May 2018, and workers have only just erected the makings of the first level after two years... 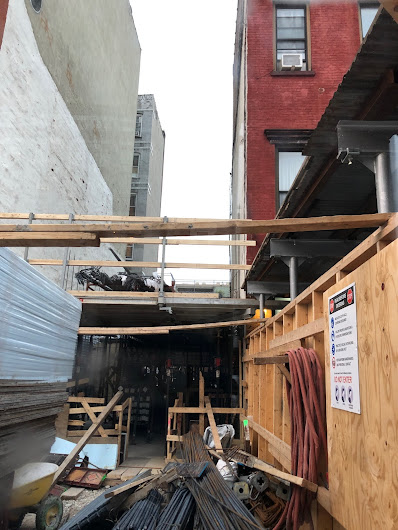 The inexpensive eats favorite reopened on July 10 after being closed for four months during the COVID-19 PAUSE. Late last month, Punjabi Grocery and Deli fan Jessica Morgulis launched a crowdfunding campaign to help keep the longtime favorite up and running.
Previously on EV Grieve:
• How you can help Punjabi Grocery & Deli stay in business

• At long last a taxi relief stand for East Houston and 1st Street outside Punjabi Grocery & Deli
Posted by Grieve at 5:05 AM

There are actually three benches just to the left of the scaffolding. With or without scaffolding that is not a really an appealing place to sit and eat something. A much nicer location is the playground one block east on Houston.

As mentioned previously I would suggest that Punjabi actually advertise in their window that they sell takeout food. Every little bit helps.

Best samosas on the planet!

The owner of the building requiring the sidewalk shed should also be required to put signs up for the businesses being obscured.

It's almost as if the city WANTS these beloved institutions to fail, the way the business keeps taking these hits with NO assistance...

How is there nothing in place to help businesses yet - both for normal construction interference, as well as the revenue lost due to COVID?

Where is the leadership? How is it this hard to get things done in a country supposedly "of the people, by the people, for the people..."

Sidewalk sheds should be REQUIRED to compensate every business whose facade or access they impede/obscure. Punjabi should be reimbursed for all the things that have damaged their ability to do business and that were beyond their control, going all the way back to the infinite construction on Houston St.

Actually, it doesn't seem like the end of the world. Their costumers won't be deterred by that. Especially not at nights.

they want this type business gone from NeoLuxury LES - 'they' being the twisted real estate lobby that owns administration after administration...

Walked by the place today, it's really not a big deal at all, the new scaffolding. Businesses live with this in NY forever.