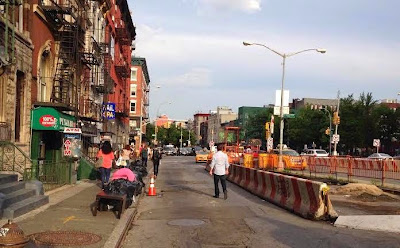 Given the never-ending East Houston Reconstruction Project, the folks at Punjabi Grocery & Deli on East First Street near Avenue A/East Houston are struggling to stay in business. The storefront, which arguably serves the best inexpensive vegetarian food in the neighborhood, is losing a big chunk of its audience: cab drivers.

The construction site has taken up all the parking spaces for cab drivers, making it nearly impossible for them to stop in for a meal. (Those who do stop face a getting a ticket.)

So Punjabi is petitioning the city to bring a taxi relief stand to the front of the deli, "a place where taxis can park for an hour so drivers can get a meal, use the rest room, and relax before getting back behind the wheel."

Here's more from the petition:

Though the City and state government collect taxes for each trip from commuters in the form of surcharge through hard working of drivers, they do not create or give much facility and respect to taxi drivers. Since last many years this particular area is under major road and other repairs.

On the top of that construction companies using this area as their personal storage and stocking facility. Due to that in this all area you only see no parking signs. Parking to use the facility become more and more difficult and drivers get parking violation tickets. But the city government official do not think about creating facility but they are only interested in creating more hardship to their hardworking community. 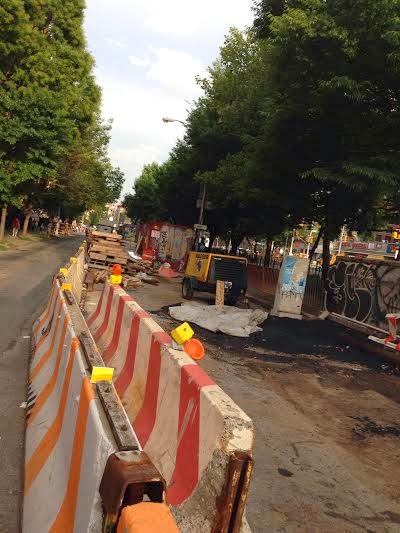 You can find the petition here.

This is exactly the kind of business that we need around here. As it stands, the inexpensive, quick-serve restaurants are disappearing (Bereket ... Cafe Rakka on Avenue B ... First Avenue Pierogi and Deli ... and soon, Snack Dragon, to name a few).

As for the East Houston Reconstruction Project, it is now scheduled (PDF!) to be completed by mid-2016, according to the latest city estimates. It doesn't seem possible that Punjabi Grocery & Deli can last two more years at this rate.
Posted by Grieve at 4:58 AM

It might help if Jeremiah's petition were more of a petition and less of a blog post.

Jeremiah didn't start the petition, he just reported on it. Hence the blog post.

Someone launched the petition back on June 5.

@Anon. 7:58 - Snark much? At least Jeremiah is involved and trying to do something to help, what about you?

Residents have no where to park either, and if an ambulance has to go to Meltzer, it effectively results in the closure of the street. This blog should keep a close eye on this construction project, especially since NYCHA is planning on building a luxury high rise on this block too. It should not take close to a decade to lay a pipe across Houston. It is making the area unlivable.

The petition can be found via the link below the photo, that says "you can find the petition here"... click on it, and it takes you directly to the avaaz.org petition... this is easy... stop whining, and do something to help... even something so small as to sign a petition... how about stopping by Punjabi and buying a meal?

I live in the building above the Punjab and can attest to the disappearance of much of the taxi business. The doucheoisie do not patronize this kind of establishment and go to the corner for Boulton & Watt. We thought the place was a goner two years ago then the mess of Houston cleared up some parking spaces. Alas they have been consumed by the construction again. Despite the rude people who use the stoop to dine on (there are some nice ones who move when we come and go) I do not want this place to die. Please sign the petition!

unfortunately the city only has two concerns, the billionaire buying up property everywhere and the tourists that keep the billionaires in business. The hard woking people like taxi drivers are never considered when plans are laid.

I love you EV Grieve. Thanks for keeping us all informed. Even though I no longer live in the EV, my heart is still there! And the neighborhood is changing way too dramatically. Everything I once loved is being transformed into a white-tiled craft beer and specialty cocktail lounge. BARF. Keep up the great work!