Jewels is the new tenant for the former Ben & Jerry's space on St. Mark's Place 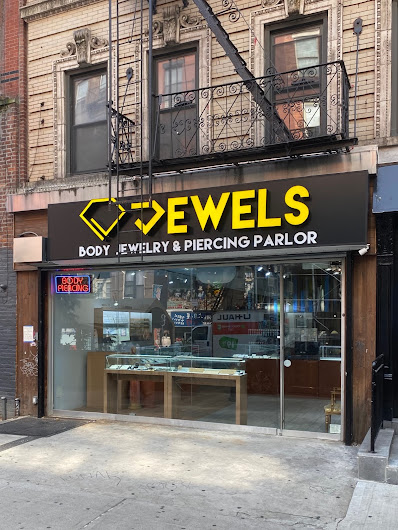 You may have noticed that Jewels recently moved a few storefronts to the east on St. Mark's Place ... they made the move to the larger space in early August, though the new sign just arrived for the body jewelry and piercing parlor here between Second Avenue and Third Avenue. (Thanks to Steven for the photo yesterday!)

They quickly took over 24 St. Mark's Place after Ben & Jerry's officially closed at the end of July.
This also marks the first non-food/"dry" business at the address in nearly 50 years. No. 24 was the Ice Cream Connection in the early 1970s before the owners of Dojo opened the Japanese restaurant here in 1974.
We've also had a Caffe Bene and Pinkberry and a few other things I'm forgetting here.
H/T Upper West Sider!
Posted by Grieve at 5:00 AM

Is it time to recognize body piercing as a sign of gentrification?

are you ever happy Noble?

Ha, my first instinct was to think this referred L.E.S. Jewells. Gone but not forgotten.