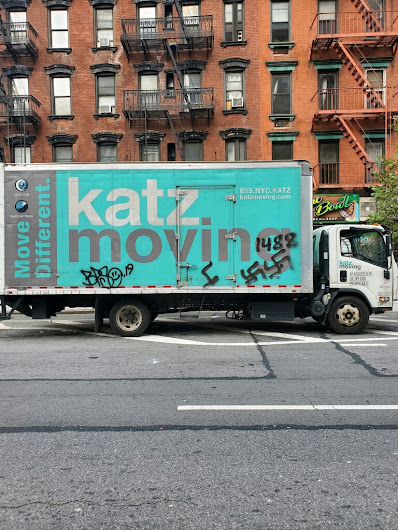 The graffiti on the Katz Moving truck included multiple backward swastikas and the numbers 1488, signifying the white supremacist "14 Words" pledge. The Senator's office reported this to both the NYPD and the Anti-Defamation League. It was not clear when the graffiti was added to the truck of the Long Island City-based company.
"Hate is not welcome in our district, in Manhattan, or in any other part of our city," Hoylman said in a statement. "The perpetrators of this attack must be caught and held accountable. Close to 40,000 Jewish Holocaust survivors live in New York City. It hurts my heart to think that the many people who found refuge in America are still being targeted by this hateful ideology."

Just saw this on the west side of 1st Avenue between 2nd and 3rd streets. Sickening. The perpetrators must be found and held accountable.

Even if the perps are known, racism and hate sadly often goes unpunished... https://gothamist.com/news/orthodox-anti-maskers-crash-nyc-covid-outreach-scream-racial-epithets

Those aren’t backwards swastikas. The “correct” Nazi swastika is a counterclockwise S-swastika, as these are. The clockwise “ backwards” or Z-swastika is an ancient Hindu sun-sign, a good-luck sign or blessing symbol. Stupid Nazi symps usually get it wrong.