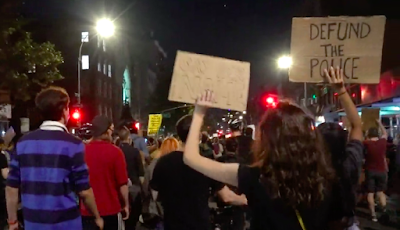 Protests broke out around the city — and elsewhere in the country — yesterday after the news that none of the three officers involved in Breonna Taylor's death were charged with her killing.
A Kentucky grand jury charged Officer Brett Hankison with three counts of wanton endangerment for firing into Taylor's neighbors' homes during the raid on the night of March 13.
One of the NYC protests — a group estimated to number in the thousands — traveled down Second Avenue from 14th Street before turning west on Third Street to Broadway.
EVG contributor Stacie joy shared this video clip from Second Avenue around 10:30 p.m. ... as the protestors chanted "Breonna Taylor — say her name" ...
"I was surprised by just how many people were there, and also by the astounding police presence," Stacie said. "I haven't seen that many police vehicles mobilizing for a protest in a long time. My entire time at the protest was orderly and peaceful."
There were no reports of arrests related to the protests citywide, per published reports.
Posted by Grieve at 12:30 PM

When will the cops stop barricading "their" block? (5th street between 2nd and 1st, where the precinct is.) It's completely unnecessary and must be negatively affecting nearby businesses. Not to mention people in wheelchairs or pushing strollers can't access the block at all now. You would think they would want to create more goodwill in the community with everything going on.

The cops will probably stop when the endless protests stop.

And yes, some places on the block have already closed and cited the blocked street.

If only the police had protected the US Constitution and people’s individual rights as diligently as they protect their own police precincts, perhaps we wouldn’t be in the situation we’re in right now.

I am seriously thinking that most of the NYPD doesn't really care any more. ALL NYPD members should be required to live within the boundaries of NYC.

It would be amazing to see officers on foot patrol again; they used to do that, and they knew their neighborhoods and often had important info AHEAD of when a problem happened. But that takes time & trust, which is the opposite of what we are seeing with the increasing militarization of the NYPD. I guess it's much easier to arm them than to it is to train them as human beings.

I don't have the answer to the evident problem of the NYPD's arrogance and disinterest in serving the community, but I think the way they screen recruits for personality traits needs to seriously change, b/c they're getting too many officers who can't keep their wits about them, even in low-pressure situations.

I've lived on the precinct block for 20 years and the cops have NEVER made themselves part of the community. No patrolling, socializing, chatting with neighbors, nothing. None of them live here and they don't care about those who do. They put up barricades when the new precinct house reopened several years ago and have only added to them since. They see residents as enemies and treat us as such. They apparently have great concern for the Samuel Cox statue in Tompkins as they are forever guarding it against us citizens, who area apparently so fearsome, they feel the need to block of the entire street and do damage to the businesses therein. If I was attacked on the street, I have zero confidence they would respond or care. If a Cooper Union student decides to sit on the statue of Peter Cooper in Cooper Square for an hour, you can bet the entire 9th precinct and backup reinforcements in riot gear will be there in minutes. Pathetic.

Bravo! I'm saying it for over 20 years. Only the 5 boroughs residents could police the 5 boroughs. We don't want that Foreign Legion from Lilly white Long Island towns to tell us what to do in our city.

What gives the cops the right to put barriers on 5th Street? They do not own the streets! Take them away!!
Get with peace and anarchy, not cops and robbery!

"The cops will probably stop when the endless protests stop."

The endless protests will stop when the endless murders by cops stop.