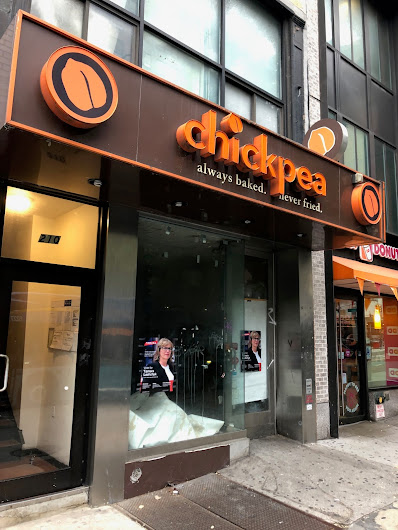 Kyuramen, a Taiwan-based ramen chain with 120 locations worldwide, is the new tenant for 210 E. 14th St. between Second Avenue and Third Avenue. (First reported by the Commercial Observer.)
This marks only the second U.S. Kyuramen outpost, joining the one in Flushing.
This arrival also marks the third ramen chain to set up shop in the East Village this year, joining Strings Ramen on Second Avenue at 12th Street and Sanpoutei Gyoza & Ramen, which remains closed for now on Second Avenue near Fifth Street.
Chickpea was the last tenant at 210 E. 14th St., closing in April 2018.
H/T Upper West Sider!
Posted by Grieve at 5:03 AM

How tone def and strategically ignorant to open a new chain in our neighborhood which is struggling to keep long time small businesses afloat. I'll never visit a chain restaurant in this desperate time. So selfish of them to think about setting up shop and trying to make profit off of our struggling economy.

Is there anywhere that one can get good soba noodles (in soup or otherwise) around here? I've missed that since M2M departed.

There seem to be all kinds of places specializing in ramen, rice noodles, and udon ... but soba seems to have been lost in the shuffle. If I'm missing something obvious, someone point me in the right direction, please!

@Anon. 9:37 - Sobaya, 229 E 9th St between 2nd and 3rd Aves, specialize in soba. Not sure if it's still happening, but you used to be able to stand in front of the place and watch their noodle maker perform in the window, making the dough and cutting it into strips.