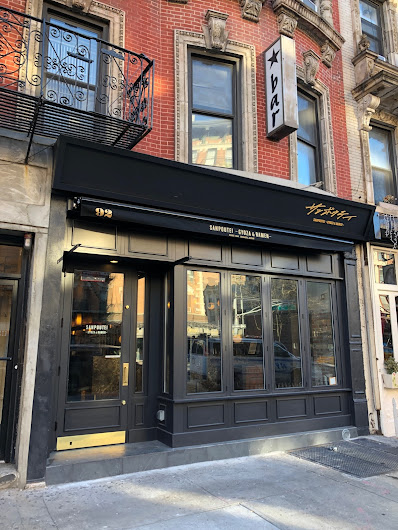 Sanpoutei Gyoza & Ramen is having its grand opening today at 92 Second Ave. between Fifth Street and Sixth Street.

As we've pointed out, this launch has been a long time in the making. In the fall of 2018, CB3 OK'd a beer-wine license (they were originally seeking full liquor) for the Sanpou Group, which operates 30 restaurants worldwide, including Sanpoutei Ramen, which started in Niigata, Japan, in 1967.

Reviews of the restaurant note that "Sanpoutei is defined by its authentic Niigata-style ramen, a shoyu-ramen in a clear fish stock-based broth."

A preview at The Daily Meal notes that "its signature ramen is made with a niboshi dashi (dried baby sardines). Other dishes will include handmade gyoza, edamame with Sichuan peppercorn, dake drunken chicken and mapo ramen."

The doors open today at 5 p.m. Their hours are 5-10:30 p.m. Sunday through Thursday; until midnight Friday and Saturday. A lunch service starts on Tuesday. You can find their menu at this link.

Sanpoutei joins a competitive ramen market in the East Village. Other recent-ish arrivals include Tatsu Ramen on First Avenue ... and TabeTomo on Avenue A.

Kabin Bar & Lounge closed in March 2015 at this address. While there were a few potential suitors, the storefront remained empty until the build-out for Sanpoutei Gyoza & Ramen began last year.

Previously on EV Grieve:
• The first sign of Japanese ramen shop Sanpoutei arrives at former Kabin space on 2nd Avenue
Posted by Grieve at 4:14 AM