A random appreciation: the Immaculate Conception Church on 14th Street 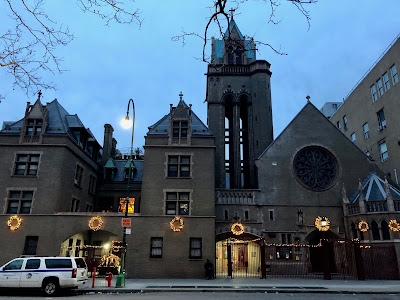 While doing some research on another topic, I came across this article from The New York Times in July 1998 on the Immaculate Conception Church on 14th Street at First Avenue.

Across from the stark red-brick boxes of Stuyvesant Town, the 1896 Immaculate Conception Church at 414 East 14th Street looks like a little French village.

The Gothic-style complex is only half of what was originally built, but the parish has taken good care of its second-hand assemblage ...

Immaculate Conception was built as Grace Chapel, an Episcopal mission established by Grace Church, at 10th and Broadway, one of New York's richest and most influential parishes in the 19th century. Begun in 1894, the chapel, seating 800, was the focal point of a large complex including a parish house, clubhouse, clergy house and infirmary. It was built to serve the poor Protestants in the area.

Immaculate Conception Church was originally across the street at 505 E. 14th St. However, the church was demolished when the Metropolitan Life Insurance Company began developing the Stuyvesant Town housing complex.

So in 1943, Immaculate Conception bought the old Grace Chapel complex.

You can read the full article at this link.
Posted by Grieve at 7:45 AM