Here's a look at two long-vacant corner storefronts along Seventh Street ... starting with the northeast corner at First Avenue... 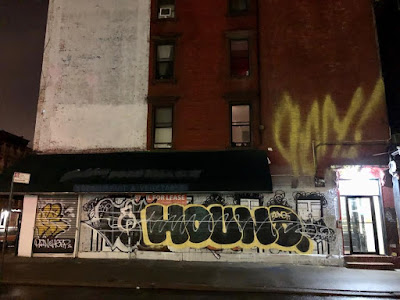 118 First Ave. has been vacant since Golden Food Market closed here in the summer of 2017 after 35 years in business. Before their lease wasn't renewed, an LLC with a West 11th Street address bought the building in the spring of 2017 for $5.8 million, per public records.

A tapas-wine bar was in the works for the space in April 2018, but those plans never materialized.

... and here's the northeast corner at Second Avenue... 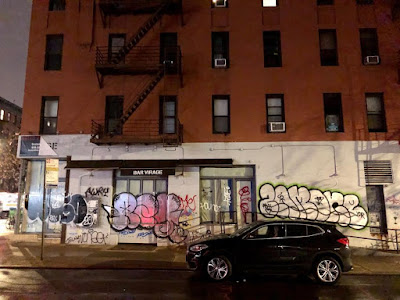 118 Second Ave. has been tenant-free since Bar Virage shut down in December 2018. Ravi DeRossi had designs on a vegan-diner concept here, but CB3 denied him a full liquor license even though Bar Virage had that same license. So he decided to look elsewhere.

Both prime corner spots remain on the rental market.
Posted by Grieve at 5:31 AM

It would be nice if an iota of energy was put into preventing graffiti like this. It would be as simple as more frequent police patrols at night. No one seems to care about quality of life concerns though.

i like the graffiti. and i sorely miss golden food market.

I would have liked a vegan diner

I was curious about this....

Q: Does a vegan diet include alcohol?
A: It's easy to find vegan alcohol, but you have to do some research since beer and wine can be processed using animal products such as isinglass, egg whites, or gelatin. ... Fortunately, virtually every brand of hard liquor—bourbon, whiskey, vodka, gin, and rum—is vegan.

It was stupid that Ravi was denied a license for the 2nd Avenue space.

Graffiti isn't a QoL issue, it's the insistence of sky business rents that are creating the QoL. Treat the cause not the symptom. I wish there was MORE graffiti around the hood. If you want no grafitti moved to the glass buildings in Midtown.

@10:44am: So graffiti isn't a quality-of-life issue for YOU, BFD. But it certainly is for the MAJORITY of the rest of us. And please stop with the "if you don't want graffiti move to glass buildings in midtown" nonsense; THAT is beyond stupid. It's like me saying you should move to the train yards b/c you like graffiti.

Why did CB3 deny the same license that Bar Virage had? You would think they’d want to encourage vacant spaces being filled.

Ohh noo! Graffiti! My eyes... they're melting!
Get over it boomers

Get over it boomers? Spoiler alert: Most of the greatest graffiti artists were boomers.

People need to stop with this “OK boomer” nonsense before they out themselves as uncool as the people they criticize based on age alone.

Why do you assume those comments against graffiti were made by boomers? Many of us living in the EV and nostalgic for the “old days” of the EV are the very people who were covering buildings in graffiti in the 70’s and 80’s.
You really have no idea of the lives your older neighbors have lived.

Agree with you 12:55..Its the Spoiled Newbies who relish this decay so they can Instagram it for their friends.

I'm mid-30s thank you. Are you pro graffiti jokes also in favor of trash on the sidewalks or maybe just letting the sidewalks crumble altogether? It's one thing to appreciate Street art, which I think is great in many places in our neighborhood, but the straight vandalism that decreases the appeal of our neighborhood and actually costs people money is absurd to defend.

PSA neighbor opinion: Please stop the generational nonsense bickering, there is no such thing as generations. There is no way a undefined age range can fairly group an entire nation as large as the US. I'm not saying there aren't groups of people but by defining people's existence and qualifying say in a matter to a ridiculous set of rules, you create Us v. Them mentality. And the thing is with that mentality is that it's:

US V. THEM, OVER AND OVER AGAIN