Arepa Factory closes up on Avenue A 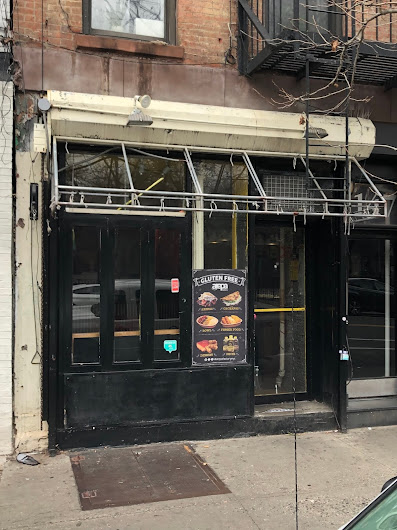 After nearly five years on Avenue A, Arepa Factory has closed here between Ninth Street and 10th Street.

Ownership made the announcement via an email to customers (H/T John for the email!). They didn't offer a reason for the closure:

We are unfortunately closing our doors at the 147 Avenue A location in our beloved East Village and want to thank our amazing guests for the loyal support you have shown us over the past years.

Business overall must be OK as they also announced that they are opening two new locations soon. In addition, they have an outpost at the Turnstyle Underground Market in the Columbus Circle Subway Station.

Previously on EV Grieve:
• Arepa Factory coming soon to Avenue A
Posted by Grieve at 4:20 AM

Whoa! I was just there the other day. I actually walked past it the first time because they took down their circular sign. I thought something was up. Pity they’re gone. I wonder if closing the location had to do with the 2 furniture rearrangings/remodel that happened this past year?

Quick was not my experience here, unhappy staff who preferred to be diddling on their cellphones and not working and made that quite clear to em as I stood waiting and waiting while they diddled. My favorite time was when they were blasting at 150 decibels - you couldn't even yell to get your order across. There are too many places to get food to incur such aggravation. In a shitty food court no one will notice the shitty service.

Strange considering the recent remodeling (although, not sure how the remodeling improved the place).

I thought it was just my experience but I also walked by a number of times before going in last summer only to be met with indifferent to the point of rude service while only getting the most mediocre of food, obviously never went back... but sad now this will probably be an empty storefront for months

Similar experience to @8:45. I liked the food here, but ordering was always unpleasant and I often felt unwelcome. Oh well.

Good Riddance! The restaurant's exhaust has been malfunctioning since October making it sound like a truck was idling outside the windows of neighboring apartments. The noise made it impossible to concentrate or have any semblance of peace at home during the last few months (I have lived here over 15 years). 311 complaints, multiple calls to the manager of this DUMP, email to the business owner - no one could be bothered to respond or address the problem. Upon seeing the 'Closing' sign on the door today I looked up at the sky with tears of happiness and performed Joyful, Joyful from Sister Act in front of this washed up hell hole. The nightmare is finally over.

Tip for the Arepa Factory owner: Destroying the quality of life of your neighbors for months on end and ignoring their complaints is not a great way to attract or retain local business. The outpost at Turnstile Underground (in the subway) may be a better fit for the strategy of rude and indifferent staff + mediocre fast food.

The food was delicious. I had no qualms with the staff.

Overpriced and lousy food with attitude! LOL. I'm a native Arepa eater and blowing 25 bucks on crap food at this place was more than enough for me. Caracas is just a few blocks away.

I liked the food, but I only went there when I had a lot of time on my hands because it took forever. This place was anything but quick serve. It's too bad because this place could have done a great business if they could have picked up the pace.

I will also echo many of the comments on here. Surly, disconnected customer service. I was treated like shit on a few occasions. I wasn't greeted, no one smiled, no one thanked me, and no one even looked at me. Each time, the employee was on their phone while catering to my order. Decent food but terrible one on one. Good riddance. Bye bye.

Not surprised because people who work there are unpleasant. I walked out last time I was there.

I tried going there a few times in early October for dinner and the place closed at 7. What?? I finally passed when it was open and asked the person in Spanish when it closed, she responded and then it still closed at a different time that very day!Somehow I think ownership changed as the space was reconfigured , the awning removed. It was cuter before and looked busier.

Rude service. Not even classic surly NY shit, just like, making me feel like I was bothering for being there or asking a question. The food was OK.