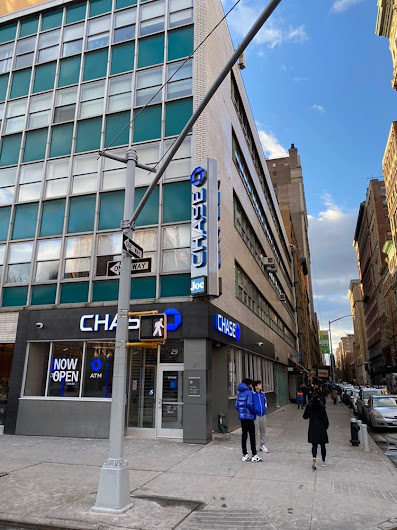 Chase, the newish tenant on the southwest corner of West 16th Street and Union Square West, has erected its new vertical sign on the building — a bland attempt at replicating the familiar neon that was here for 60-plus years. 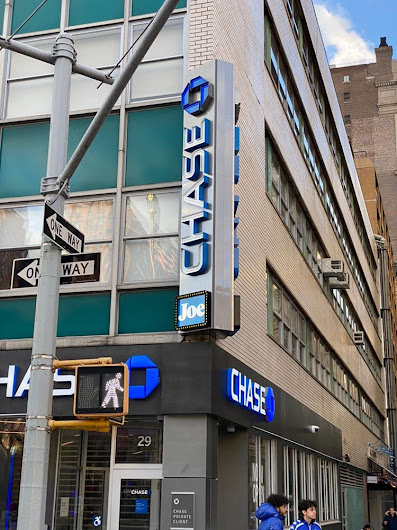 A little history. The Coffee Shop, the Brazilian-American diner run by former Wilhelmina models, closed here in October 2018 after 28 years in business. The Chase branch opened on Dec. 17 ... along with Chase-partnered Joe Coffee. (There's also another vegan quick-serve outpost of by CHLOE on the 16th Street side.)

During the renovations, workers removed the 1950s-era Coffee Shop neon sign — which belonged to the cafe (called Chase, oddly enough) that predated the Coffee Shop by several businesses.

There was some hope that the old sign would return after a cleaning/refurbishment. Obviously that isn't happening. 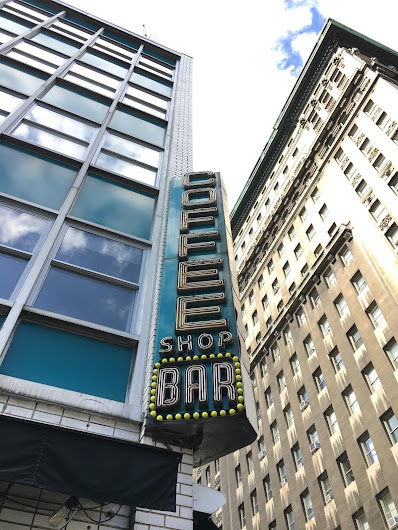 [Photo via Jeremiah Moss]
Posted by Grieve at 4:18 AM

looks like Chase has some real creative "artisans" on their payroll... ugh

You have GOT to be fuk'n kidding me. What a travesty.

At least the corner will be more pedestrian friendly. The outdoor cafe of the diner created a nuisance and hazard.

@10;12PM Don’t tell me, you're the same guy who doesn’t like newsstands because they slow down pedestrian traffic. I always liked seeing people sitting outside on that corner while dining because it bought more life to the area. Now it will be dead. Chase had a chance to be a little creative and part of the fabric of the community, but of course they chose to do neither.

@10:12AM Having had an office on the corner of 17th St & USW for 27 years, losing one more option for reasonably priced, interesting food for another bank, another coffee bar (right next to a Starbucks) and another bland fast casual chain is heartbreaking.
As for the outdoor seating, it was a pleasure to take a work break and have lunch, served at a table rather than eating from a cardboard box on a park bench.

The loss of the Coffee Shop, Chat N Chew and other independent it casual sit down restaurants is a degradation of the neighborhood.

2:34 - the goal is you understand this is not your neighborhood and you have no right to any of it. It belongs to the transnationalists, the tourists, students, investors: the temporary people.

@5:27pm: You hit the nail on the head. I was just about to write what you've already noted. This is the visual equivalent of stepping on a rake.

God, yes. Perhaps they thought it was "EV quirky" or some such.

I think there is a secret narrative to that sign: rather than "Chase Joe" it reads "Joe Chase," so I think some Chase CEO named Joe is chasing money in the form of fossil fuel investments. Ergo, "Joe Chase Climate Change!"