Spätzle alert: Zum Schneider's kitchen will be open for a few weeks longer 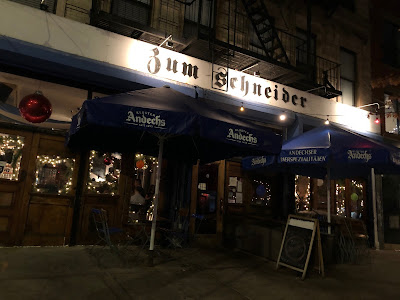 As we first reported last month, Zum Schneider is leaving its home of 20 years on Avenue C and Seventh Street at the end of February.

The landlord, listed as 229 East 7th Street HFDC, would reportedly not renew the biergarten's lease.

Feb. 25 is the last day they're open to the public. This coming Sunday, Feb. 2, was previously listed as the date for closing their food service.

However! Zum Schenier announced yesterday that their kitchen is now open until Feb. 16. Via the EVG inbox:

We have some good news. We managed to make some arrangements for the kitchen to stay open for an additional 2 weeks. Yes, more Haxen, Reiberdatschi, Spätzle and sausages. Last day for our kitchen will now be Feb. 16. Until Feb. 9 we'll have the full menu and after following with a limited menu until Feb. 16.

We will then close the place for three days to get ready for the last hurrah KARNEVAL FINAL where some snacks will be available such as warm sausages, Obazda, Leberkäs, bread and more.

We're excited and look forward to serve you our Bavarian specialties for a bit longer.

Zum Schneider is searching for a new NYC home "with a landlord who appreciates our tenancy." They've already announced that they will once again host their Oktoberfest tent along the East River this fall.

• More details about Zum Schneider's February closing date on Avenue C
Posted by Grieve at 4:50 AM

I've been going for dinner every week since I heard the news that they're shuttering, since I wanted to eat all of my favorites on the menu one last time in that beautiful interior. This past Tuesday night it was packed; I was talking to Sylvester, who said he's been busier these last few weeks than he has been in the last five years, that it took news of his closing to bring the crowds back. He also said they were looking in Hell's Kitchen, but it would be a while before they re-opened. He finally summed it all up by saying firmly, "The East Village is dead".

I was hoping that they would land at the old Virage space on 7th and 2nd, but workers there seem to be cleaning that space up for something else, but I don't know what.

This was 20 years of HELL for the neighbors.