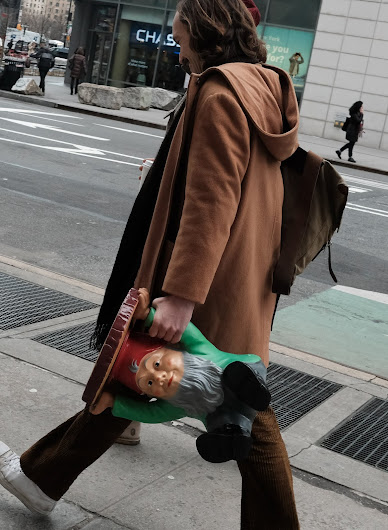 [Gnome side table spotting on Astor Place via Derek Berg]

Supporters trying to get activist Dorothy Day, founder of the Catholic Worker Movement with roots in this neighborhood, canonized as a saint (The Washington Post)

A look at some East Village street art (Off the Grid)

Ranking the City Council members — Carlina Rivera listed at No. 18 out of 50 (City & State)

There's a Q&A with "JoJo Rabbit" writer-director (and Hitler star) Taika Waititi after the 7 p.m. screening Friday at the Village East on Second Avenue and 12th Street (Official site)

Peter Brant preps for a major Warhol exhibition in 2021 at his foundation's East Village HQ on Sixth Street (Architectural Digest ... previously on EVG)

A Manhattan judge awarded a Brooklyn-based artist more than $250,000 after a now-closed Lower East Side gallery failed to pay her for the pieces she sold there, and refused to return her unsold work (Daily News)

Loved the Moss piece - could be me except when the brokers show up I stick my head out and ask the prospects how much they enjoy constant noise, vibration and fumes from the restaurants downstiars on cancer row (6th Street).

The Moss piece was indeed excellent.

Jeremiah's piece is excellent. I can identify with so much of it. I'm glued to my peephole, envision my lonely apartment death, and Google my insufferable neighbors. I think about leaving, but why and I have nowhere to go. Can't afford to go anywhere anyway. I keep waiting for the ebb, for the tide to reclaim the invaders. I, too, am good at being quiet and waiting. Unfortunately, the city is not.

Thanks for the tip about Jojo Rabbit! Been wanting to see it and with Taika being there is an added bonus! Was able to snag one of the very very few remaining tickets! Really excited.

JoJo Rabbit is a great movie, and watching how Taika pulled off playing a young boy’s naive version of Hitler in such a deft manner is amazing. Also be sure to see Parasite if you haven’t already, one of the best films in years.