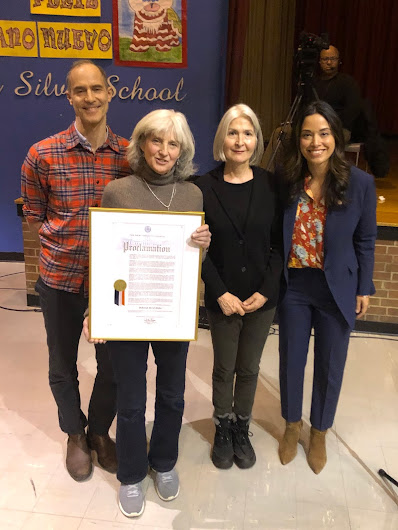 Deborah Hulse, better known as Debi the Gardener to regulars of Tompkins Square Park, retired in December after nearly 15 years with the New York City Department of Parks and Recreation.

During the January Community Board 3 meeting last night, local City Councilmember Carlina Rivera recognized Hulse for her years of service to the neighborhood. Hulse had worked in Tompkins Square Park since March 2009.

EVG correspondent Steven shared the above photo from the meeting. From left: Alan Good, who donated the ping pong tables to the Park, Hulse, Park regular Monica Rittersporn, and Rivera.

Previously on EV Grieve:
Debi the Gardener retires
Posted by Grieve at 2:00 PM

Damn, I would have loved to have been there. She was a wonderful gardener and human being. Our park does have colorful elements!! She will be sorely missed.

Hurrah for Debi. She was a master gardener and kept the park looking good for all those years. Thank you, Steven, for being there to document the recognition.