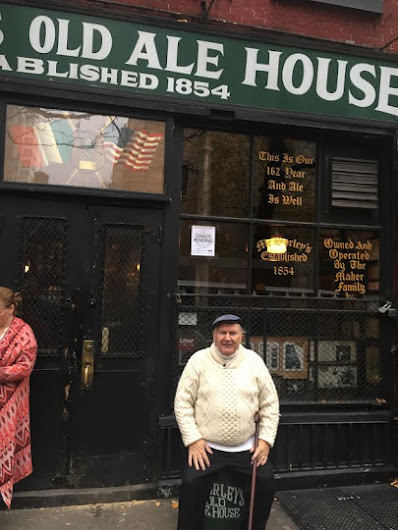 Matthew "Matty" Maher, who started as a bartender at McSorley's in 1964 and later became owner of the East Village institution on Seventh Street, died on Saturday after a short illness. He was 80.

News of his passing was reported first in his native County Kilkenny in Ireland. Per the Kilkenny People:

He had a welcome for every person from Ireland and made life easier for many people who came to the U.S. to start a new life or to earn enough to set out on their own.

It is true that when the last owner of McSorley's before Matty, Harry Kirwan from Lisdowney came home on holiday to Ireland in 1964, his car broke down and that he was picked up on the road by Mattie.

Harry promised him a job in New York. Mattie went stateside to work as a waiter and bartender at McSorley’s. In 1977, Matty bought the premises from Harry Kirwan's son. 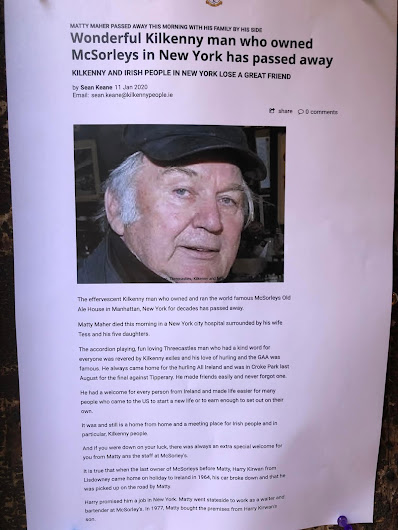 [Photo at McSorley's yesterday by Steven]

As for the bar's ownership since opening in 1854, we turn to McSorley's historian Bill Wander, who told this to 6sqft in 2015:

Depending on how you count, there have been seven owners of McSorley’s – John, his son Bill, then Dan O’Connell who bought the place. Daniel’s daughter Dorothy inherited McSorley’s at his death. Dot’s husband Harry managed the place and was the owner for the briefest time, a few months after his wife’s passing away. Some people don’t count Harry, as the estate was still in court when he died. Their son Danny owned it then, but decided to sell it to the current owner Matthew Maher, a trusted employee since the early 1960s. But in 161 years, that ownership covers only three families.

Maher is survived by his wife Tess and daughters, Ann Marie, Teresa, Kathy, Adrienne and Maeve.

In 1994, Maher’s daughter, Teresa Maher de la Haba, became the first woman to work behind the bar. She is now the owner, and will keep McSorley's as is moving forward along with her husband, bartender (and artist) Gregory de la Haba.

As previously reported, founder John McSorley owned the building at 15 East Seventh St. near Cooper Square. Since then, every time the bar changed hands, the building went with it.

"McSorley’s will be in good hands with Teresa and her husband Gregory," said former bartender Michael Quinn, whose Feltman hot dogs are sold at the bar. 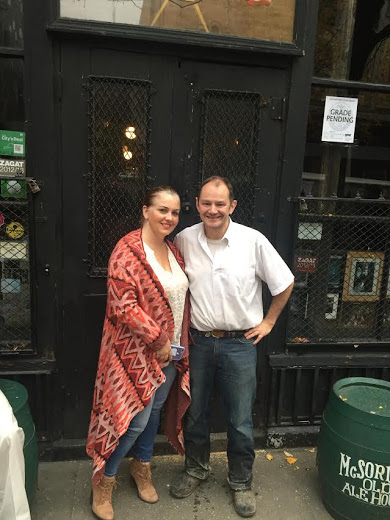 [Teresa Maher de la Haba with Mike the bartender from 2016]
Posted by Grieve at 4:30 AM

I remember when women weren’t allowed in McSorley’s, even though a woman owned it. And Allen Ginsberg and Jim Morrison and I couldn’t go there for a drink after a Jefferson Airplane show at the Fillmore East...

RIP. I’ll stop by for a dark AND light pint later this week in memorizing.

A few years ago I got some sandals from Barbara Shaum who was allegedly their first female patron.