Factory Tamal bringing its freshly made tamales to 4th Street 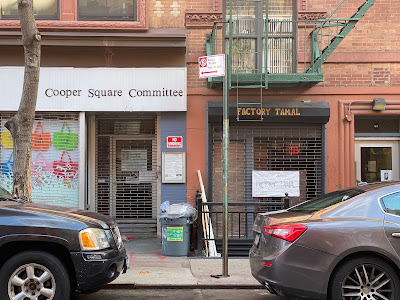 Factory Tamal, which offers a variety of popular tamales, egg sandwiches and panini from a small take-out space on lower Ludlow Street, is opening an outpost at 63 E. Fourth St. between Second Avenue and Cooper Square.

The signage arrived a little earlier this month with an expected soft opening on Friday. (And this is a second location — they're keeping the current space at 23 Ludlow St.)

Owner Fernando Lopez makes his own masa — "faithful to the ancient Mayan way," as the Times put it in an August 2017 feature. And the result of his hard work? "Mr. Lopez’s tamales are beautifully fluffy, clingy and crumbly at once, a texture that calls to mind the airiest of poundcakes."

Check out this Eater video from Jan. 2 for a behind-the-scenes look at the process...

No. 63 previously housed Miscelanea NY, the Mexican cafe-market that closed back in June after owner Guillaume Guevara decided to return to his native Mexico.

Great news! Love their tamales and happy to have them across the street from the food co-op!

This is so exciting! Thank you.

Very excited. I'm a big fan of the tamale with chicken and green sauce. Better get some elastic waist pants!