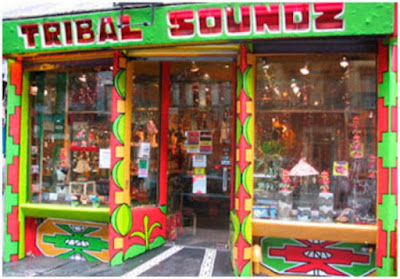 The shop's legacy has endured since closing in 2008. Tomorrow (Thursday) night, Balaban is hosting a Tribal Soundz musical reunion with a variety of performers in the space, now the East Village Playhouse.

The space is now a wonderful small theater and we've been invited back to reunite, play some music, hang out, brainstorm & imagine what we can do together in the future. Come early for seating! Doors 5:30 p.m. Limited Seating.

The free performances will run until 9:30 tomorrow night.

I asked Balaban about what made the store special.

"Our tagline in the Tribal Soundz days was 'Bringing you the world's music, and everything you need to play it,'" she said. "Tribal Soundz was more than just a store — it was the nerve center for global music action in NYC. We sold instruments from around the world, CDs, held music workshops and performances. All kinds of musicians and people from the neighborhood were brought together, centered around global music."

And for one night, that will be happening again.
Posted by Grieve at 5:30 AM

You might be thinking about the store down the street !