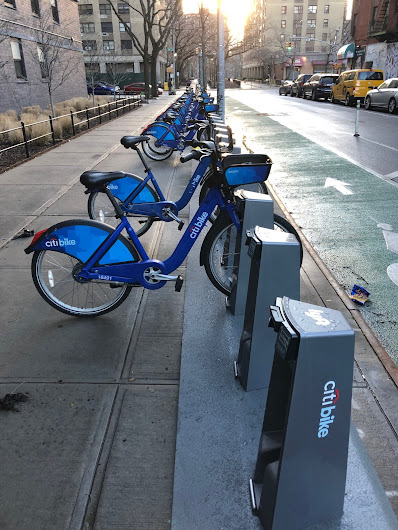 Almost one year ago to the day, Citi Bike announced citywide expansion plans for its fleet, a plan that included two new docking stations in the East Village — First Avenue at Fifth Street and 12th Street at Avenue C. 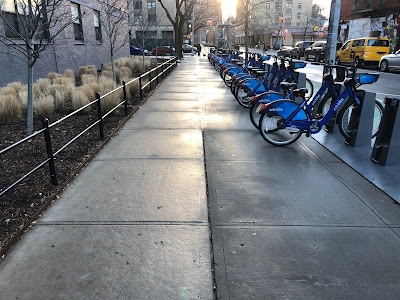 Previously on EV Grieve:
A look at where Citi Bike is expanding in the East Village
Posted by Grieve at 4:01 AM

But same as on 1st Av and 6th St the city DOT is doing it wrong: Citibike stations should not be on Placed the sidewalk. There is plenty of room across the street on the roadway nexus to the south curb. This is not a done deal, citibike stations are very easy to move. Write to DOT and tell them that.

If there is an inch of breathing room somewhere,
Citi will squeeze itself in.

How is Citibike allowed to take HALF the sidewalk away from pedestrians? Does ANYONE in city government care that this affects not only ordinary pedestrians, but also anyone with a walker, on crutches, using a mobility scooter, etc.??

I guess my bottom line question is: How the hell can this be allowed?

People talk about oooh, private cars shouldn't be allowed to park for free on city street, but what is THIS, if not corporate bikes taking over city SIDEWALKS for free, while creating an obstacle course for anyone using the sidewalk?

I'm not a Citi Bike fan but even so that is NOT half of the sidewalk. Maybe the bikes are taking up 30%. There is plenty of room for everyone

@1:03pm: If you truly can't see that those bikes and docks are taking up very close to 50% of the sidewalk width, then I suggest you get your eyes checked soon.

PS: Ask anyone who's disabled how much room there is for 'everyone'!

I take offense to your language. Obviously you do not know anyone who has disabilities. You never EVER say someone is "disabled."

Never say “a disabled person” or “the disabled.” Say a person or people “with disabilities.” You should help to promote an inclusive culture.

but the big double dock on Ave D & 8th St is gone.

People complaining about it taking up space must not walk by every day... This sidewalk is huge and it's never busy enough to be full anyways.